If you thought the legal wrangling surrounding Obamacare was fun, hang on. The U.S. Supreme Court soon could consider another tax case, this time involving the most popular sport in the United States.

Cleveland plans to ask the country's highest court to decide whether it can continue to assess its current jock tax, the money it collects from visiting professional athletes. 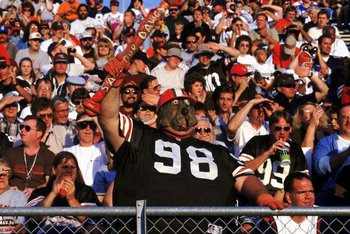 NFL players who come to Cleveland for games face not only a jock tax, which is under legal challenge, but also the Browns' Dawg Pound fans like this guy.

In April, the Ohio Supreme Court ruled that Cleveland's games-played method to determine the city's portion of taxable income from visiting athletes violated due process.

The state's high court said that Cleveland instead must calculate its jock tax based on the number of days each visiting player works in a year, the taxation method used by other U.S. cities with a jock tax.

Tax refunds could add up: The court also ordered Cleveland to refund the taxes it illegally collected from the two former National Football League players who had filed suit challenging the taxes they were assessed.

That ruling opened up the potentially expensive possibility that Cleveland could end up issuing refunds to other athletes who were taxed in the same way. The city does have, after all, not only an NFL team, but also a Major League Baseball and National Basketball Association.

Cleveland to go to the top: In an effort to salvage its jock tax system and avoid devastating the city's treasury, Cleveland plans to go all the way to the jurisprudence top.

Attorneys for the city of Cleveland filed paperwork with the Ohio Supreme Court on Aug. 5 asking that court to stay of its ruling until the city can petition the nation's highest court for a hearing.

The Ohio Supreme Court's finding that Cleveland's "games-played [taxation] method 'would constitute extraterritorial taxation' raises a question of federal law that has widespread implications since for due process purposes, an apportionment method need not be based on time or days," wrote Linda L Bickerstaff, Assistant Director of Law for the city, in the filing.

"[F]or almost 100 years … the United States Supreme Court has consistently held that so long as the income is derived from an in-state source, jurisdiction to tax exists for due process purposes without physical presence," continued Bickerstaff. "No one can dispute the national importance of these issues."

Widespread and costly jock taxes: The jock tax has been around for decades in various states. The tangle of state and municipal rules pose an annual tax mess for athletes, or at least their accountants.

Not only must professional players pony up more money to more tax collectors, they must pay for competent tax help to meet their filing responsibilities. The costs for many highly paid athletes easily reaches five figures.

But that's generally a drop in the proverbial overflowing athletes' income bucket. And it's a price worth paying so as to avoid running afoul of myriad tax offices.

Who does Scalia root for? I'm hoping the Supreme Court of the United States will grant certiorari in the Cleveland case, not because I think that Ohio city's jock tax is correct, I don't, but because I want a sports tax case to go before the nine justices.

Not only will we get the United States' highest court's legal ruling, we might also find out a thing or two about their sports' preferences. That would be fun.

Good point, Chris. Most jock taxes do apply to other performers, too, at least on the state level. But this lawsuit looked specifically at how Cleveland taxes visiting professional athletes. I'll have to do some digging to see what the city does re musicians et al.

Does this apply to musicians also? If a musician plays a show in Cleveland, I suppose they tax the artist fee earned at that venue. But what about all the time a musician spends rehearsing and recording? Is that considered a day worked? After all, they have to prepare.

Its probably not relevant since I imagine that professional athletes are W-2 employees where musicians are typically self employed.