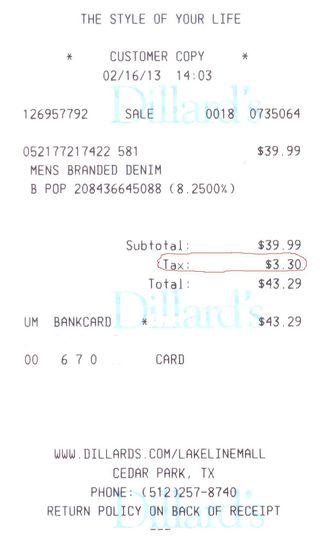 Massachusetts shoppers are taking advantage of no 6.25 percent state sales tax on most personal items costing $2,500 or less. The holiday began today, Saturday, Aug 15, and runs through Sunday, Aug. 16.

Neighboring Connecticut holds a week-long tax holiday. It kicks off tomorrow, Sunday, Aug. 16, and offers shoppers relief from the state's 6.35 percent sales tax on clothing and footwear priced at $100 or less through next Saturday, Aug. 22.

Saving on city taxes, too: While the holidays are the products of state legislation, many more local jurisdictions also waive their separate sale tax collections, too.

That was the case here in Texas, which held its annual tax holiday last weekend. In addition to escaping the Lone Star State's 6.25 percent sales tax on certain products, my fellow Austin shoppers also got a break from the city's added 2 percent sales tax.

That extra two pennies per most purchases is the most common local sales tax rate in Texas.

But my home state is not alone in allowing cities to collect some extra revenue from its residents consumers.

Local sales taxes are collected across most of the United States, even in Alaska which doesn't have a state sales tax of its own.

Sales taxes aren't as big in Texas: And while we Texans like to brag about how big things are here, no city within our borders made either of two recent tax lists compiled by the Tax Foundation.

The Washington, D.C.-based tax policy nonprofit first took a look in July at the 15 cities that on Jan. 1, 2015, will have the highest combined sales tax rates -- this includes levies by the state, county, city and public transit services -- Chicago topped the list.

At the time of the Tax Foundation's analysis, Cook County, Illinois, lawmakers had just adopted a one percentage point county sales tax increase. When that that tax takes effect next year, it will mean that the Windy City's combined sales tax will be 10.25 percent.

Although that tax rate won't take effect for four and a half months, it still earns this week's By the Numbers honors.

America's highest city sales taxes: Many media outlets touting the impending Chicago sales tax as the highest in the country. The Tax Foundation, however, says that's not true.

That distinction goes to a handful of towns in Tennessee and one in Arkansas with 12 percent combined rates. wrote Jared Walczak on the Tax Foundation's website. But those locales are tiny, with populations of a few thousand people or less. A smattering of small municipalities in Arizona, Louisiana and Oklahoma also feature higher combined rates, said Walczak.

But, noted Walczak, Chicago's sales tax rate next year will out as the highest rate in a major city.

As for the highest sales taxes in major cities now, Walczak refined his analysis an produced a second list of America's most populous cities with the highest combined state and local sales tax rates. They are:

The Tax Foundation also provides a list of the combined tax rates in the top 50 most populous cities int he United States.

Austin's 8.25 percent combined sales tax rate was enough to get us ranked number 17 in this list. We're joined there by several other big Texas towns, including Dallas, El Paso, Fort Worth, Houston and San Antonio.

And despite our legendary boastful nature, taxes are one area where Texans are glad we're not on top.