A-list performers would get tax credit for New Jersey shows

Everybody's a critic, even the New Jersey's chief economic officer if one state senator's tax credit for performers is enacted.

Republican Sen. Tom Kean, Jr. this week renewed a push for his bill that would provide a tax break for so-called A-list performers in the Garden State. 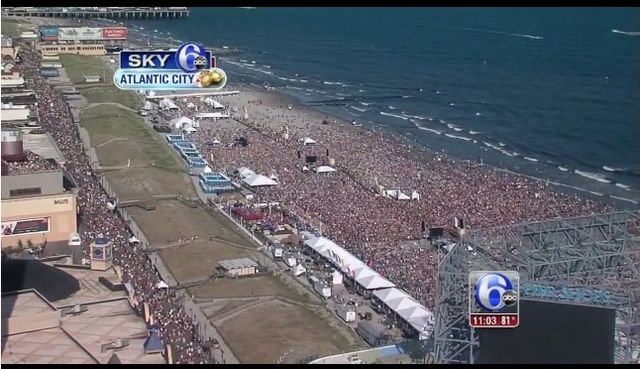 The bill is designed to boost amusement offerings in Atlantic City. Under S. 2721, qualifying acts, which include a variety of entertainers and athletes, who perform at least four times in Atlantic City's tourism district would get a state tax credit on all income they earn from any New Jersey venue in that same calendar year.

Official state critic: So just who would make the cut? The determination of who's on the N.J. tax credit A-list would come from the Garden State's Secretary of State.

Kean's bill says top nationally-ranked live performing artists "will be identified by way of a national review to be annually compiled by the New Jersey Secretary of State."

Not to throw shade at such a process, but who's to say that the secretary's personal preferences couldn't come into play during the selection of which critiques to consider? It's conceivable that a bad performance review here or sagging record sales (OK, downloads for all you hip kids) there could be overlooked or exaggerated.

The bill also cites "live public performance demand in major national venues and pay-per-view media" as a key ranking factor for top-tier status. In subsequent statements about the bill, Kean added ticket sales, awards and other criteria to the qualifying list.

There also will be a time factor that could help or hurt acts (and fans) depending upon how performers are doing.

The bill calls for the A-list ranking to be completed "in advance of and to apply to the next taxable year." That means an act that's hot in 2016 it could fill its schedule with New Jersey venues and apply for the tax credits in 2017. Let's just hope the group is still as popular in 2017.

Still, it's a creative tax break approach and one that Kean promises will have a transparent application process that will be administered by the Director of the Division of Taxation.

Maroon 5 kickstarts tax credit: Kean introduced the bill back in January. At that time, he noted that people from New Jersey and across the world flock to Las Vegas to see Britney Spears' show, which has generated millions of dollars, revitalizing business, adding jobs and increasing overall state tourism and revenues.

Kean started actively lobbying for consideration of his bill this week in the wake of the wildly popular Maroon 5 beach concert in Atlantic City on Sunday, Aug. 16.

He says that one show's extraordinary attendance proves the A-List tax credit proposal would establish the iconic Jersey Shore location as a premier entertainment destination.

"The more than 50,000 fans who paid to see A-List performer Maroon 5 give us a glimpse of how Atlantic City can transform into a premier entertainment destination, drawing tourists from the most-densely populated northeast corridor," says Kean. "With S. 2721, Sunday's results wouldn't be an exception. They would be the rule."

This is insane! Why does Atlantic City get preferential tax treatment at the expense of the rest of the state. Let Atlantic City find its own way already NOT AT THE EXPENSE OF THE NJ TAXPAYER. We have plenty of great venues around the state of New Jersey that deserve the same treatment. This is another New Jersey ATLANTIC CITY TAX OUTRAGE. STOP FUNDING ATLANTIC CITY ALREADY. New Jersey taxpayers are sick and tired of it.
P.S. And who is going to select A list talent? The NJ Secretary of State? Certainly no personal preferences will come into play .... NOT!!!
I love our concert venues in the state of New Jersey. I want choice and variety. I don't want another government monopoly creating hardship for the other venues around the state. This will certainly ruin all the other venues who make a go of it legitimately WITHOUT STATE FUNDING.
Come on already NJ legislators. Can't you see the light? It's time to let Atlantic City go. Stop funding it with our hard earned $$$$$$. Stop your crazy tax schemes for your darling Atlantic City.