President Barack Obama made history last week when he became the first sitting commander in chief to a federal prison. But he wasn't the only public official looking to change some federal rules that relate to incarceration. 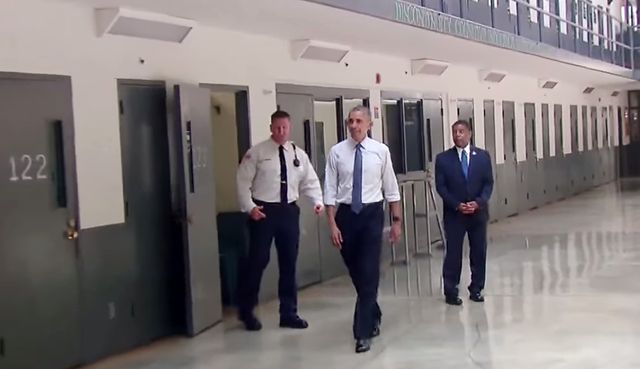 President Barack Obama visited the El Reno Federal Correctional Institution outside of Oklahoma City on July 16. It was the first visit by a sitting U.S. President to a federal prison. Click image to view the White House's YouTube report on the visit.

The Internal Revenue Code says that the only court damages a person can collect tax-free are those that are compensation for physical injury or sickness.

That generally means that other compensatory payments, say for trauma and distress caused by the circumstances, or punitive damages designed to punish the person, company or institution that caused the harm, remain taxable.

And those payments generally are taxed at ordinary income rates, which currently range from 10 percent to 39.6 percent.

So a hefty payment as compensation for wrongful incarceration could be very costly come tax time.

Tax-free awards for those wrongly jailed: Johnson's H.R. 3086, the Wrongful Convictions Tax Relief Act, would change that tax situation when the compensation is to people who have been imprisoned due to a wrongful conviction.

"Many folks know that I spent nearly seven years of my life as Prisoner of War," said Johnson in a statement announcing introduction of the bill. "Those are years away from my family that I can't get back, and the same can be said for individuals who have been locked up due to a wrongful conviction. While I wish we could return to them the years these innocent individuals lost in imprisonment, Congress can ensure they don't suffer the additional injustice of the IRS taxing their restitution."

Texas provides $80,000 per year as well as other benefits for those who have been wrongfully imprisoned, noted Johnson. Johnson says that money and other payments in connection with wrongful imprisonment should not be taxed.

"These wrongfully convicted folks, and their families, have already suffered enough," says Johnson. "They are working hard to move forward with their lives and they deserve to do so without obstacle."

Anti-tax group support: Among the groups supported Johnson's bill is the anti-tax group Americans for Tax Reform. Grover Norquist, founder of ATR, notes in a letter he sent Johnson that more than half of all states offer some sort of compensation or restitution for the wrongfully convicted, as does the federal government.

"If wrongful convictions can be expected to happen, then subsequent recompense should also be expected. The nation does itself no favors by this tax penalty in the court of public opinion," wrote Norquist.

"Closing the recompense tax problem should be at the forefront of all legislators concerned with fair taxation and legal justice. No innocent person should have to spend time in prison only to find a tax bill in the mail for their rightful compensation."

Other criminal justice reform: Obama's visit to the federal facility in El Reno, Oklahoma, was to spotlight overall reform of the justice system.

The prison visit came on the heels of his speech before the NAACP's 106th national convention in Philadelphia. Obama also recently pardoned 46 people who were convicted of non-violent crimes.

There's bipartisan support in Congress for some type of prison and sentencing reform.

"We've got a lot of people in prison, frankly, who really, in my view, really don't need to be there," said House Speaker John Boehner (R-Ohio) said after the president's prison inspection. "It's expensive to house prisoners. Sometimes, frankly, some of these people are there for what I'll call flimsy reasons."

The GOP House leader said he would bring justice reform legislation to the floor for Representatives to consider.

Voting rights for felons: Meanwhile, the possibility of returning the privilege of voting to felons is getting renewed attention.

Citizens with felony convictions are restricted from voting in every state but Maine and Vermont. That's almost 6 million Americans who cannot vote because of felony convictions or laws restricting voting rights for those convicted of felony-level crimes, according to a 2012 report by the Sentencing Project.

Many states, however, are beginning to re-examine their policies in this area.

It's also been a topic, at least tangentially, in the 2016 presidential race.

Democratic nominee front-runner Hillary Clinton has advocated reforms to the criminal justice system. Sen. Rand Paul of Kentucky, who is seeking the Republican nomination, has long pushed criminal justice reforms, including the Civil Rights Voting Restoration Act, which would restore the voting rights of every non-violent felon in the country.

By the time that election is held in about a year and a half, could some current felons be casting their votes for the next U.S. president? Maybe.

And some folks who unjustly spent time behind bars and then were compensated for their jail time also could be receiving those payments tax-free by then, too.