Those of us who constructed nine-planet models of our solar system for grade school science projects have been in space geek heaven these last couple of weeks.

Pluto, which was demoted from planet to dwarf planet status, has been the recent focus of scientists and the space-loving public. NASA's New Horizons probe flew past Pluto on July 14, completing a 3-billion-mile journey that started almost a decade ago. 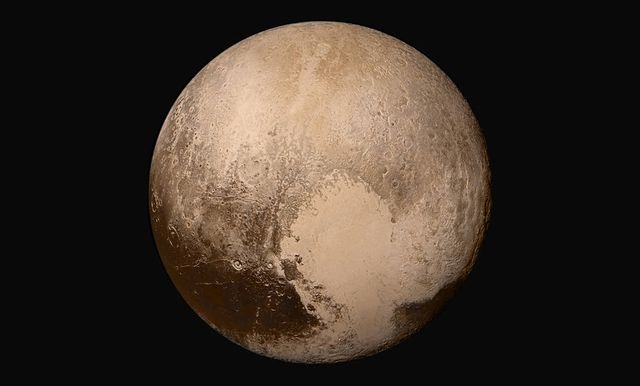 As it passed the icy orb, New Horizons sent back the most detailed images of the dwarf planet ever recorded. Scientists will be poring over those photos for years, carefully noting all the new information the deep space probe delivered.

But where will the astrophysicists et al be conducting their Plutonian research? If you believe a recent economic study, they'll be in states that have low taxes.

Scientists like low taxes: State taxes have a significant effect on the "geographical location of star scientists and possibly other highly skilled workers," write Enrico Moretti, an economist from the University of California, Berkeley, and Daniel Wilson, an economist with the Federal Reserve Bank of San Francisco, in "The Effect of State Taxes on the Geographical Location of Top Earners: Evidence from Star Scientists."

In putting together the paper for the National Bureau of Economic Research, the pair used data on U.S. patents filed between 1976 and 2010 to, in their words, quantify how sensitive star scientist migration is to changes in personal and business tax differentials across states.

Basically, Moretti and Wilson found that for top scientific earners, the probability is greater that, given the chance, they'll move to a state with lower taxes.

High earning scientists: Star scientists, for the purposes of the paper, are private sector, academic and government scientists who are in the top 5 percent when it comes to the number of patents they have filed.

These scientists, according to the paper, earn high incomes, with most of them likely to be in the top 1 percent of the income distribution.

"By studying them, we hope to shed some light on the locational decisions of other well-educated, highly productive and high income workers," write Moretti and Wilson.

Such earnings potential is further validated by an examination of high-earning professions that found astronomers are among America's six-figure earners. As a group, the more than 1,600 astronomers in the United States earn a mean annual salary of $107,140.

Good for those stargazers. That taxable annual income amount is worthy of this week's By the Numbers honor.

More than money and taxes: Of course, we are talking scientists. For many of them, what they can learn and the facilities that enable such research are just if not more important than the money. Moretti and Wilson acknowledge that fact.

"Unlike professional athletes, movie stars and rich heirs … the presence of star scientists in a state is typically associated with research and production facilities and in some cases, with entire industries, from biotech to software to nano-tech," the pair writes. These facilities also tend to influence where innovative individuals and companies decide to locate.

As an example, the paper cites two of the country's largest states that always seem to be competing for companies and their employees. California has relatively high taxes, while Texas has no personal income tax and relatively low business taxes.

Although Houston is home to the Johnson Space Flight Center and Elon Musk selected Texas' southernmost tip to locate his SpaceX project, California has Silicon Valley and a big biotech industry in San Diego. Those opportunities mean that the Golden State generally does not lose scientists to the Lone Star State.

Still, say Moretti and Wilson, "there are enough firms and workers on the margin that relative taxes matter. Overall, we conclude that state taxes have significant effect of the geographical location of star scientists and possibly other highly skilled workers."