Look out. Some hitchhiking private tax debt collectors could stall the Highway Trust Fund, which already is running on fumes. 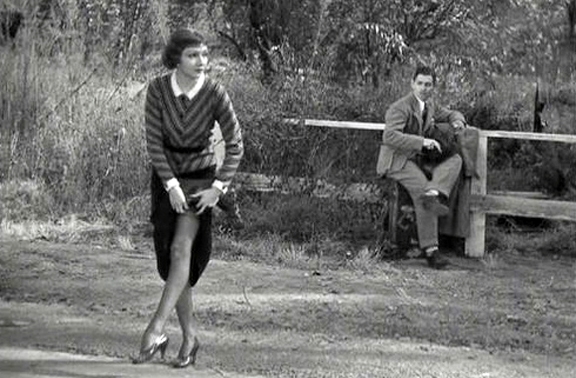 Claudette Colbert shows Clark Gable how to catch a ride in the classic film It Happened One Night. Their characters were much more welcome hitchhikers than are private collectors of tax debt who are hitching a ride on the Senate bill to pay for the Highway Trust Fund by July 31. Photo/movie trailer screenshot courtesy Wikipedia.

The Senate late Wednesday, July 22, finally restarted its transportation funding effort thanks to a 62-36 vote that will let debate on the actual bill go forward.

But how far down the road it will get is uncertain. Among the measure's opponents are some Senators who are not happy with a provision in the Developing a Reliable and Innovative Vision for the Economy (DRIVE) Act of 2015 that require hiring of private tax debt collectors.

It's estimated that the private collection agency (PCA) proposal would bring in $2.38 billion in new revenue.

Union objects: As expected, the union that represents Internal Revenue Service employees also is upset with the re-emergence of private collection agencies.

National Treasury Employees Union (NTEU) President Colleen M. Kelley wrote to the Senate this week urging it to oppose the PCA provision. She started her letter with a topic near-and-dear to lawmakers' hearts -- money.

"The use of PCAs to collect tax debts has repeatedly been shown to be a waste of taxpayer dollars," wrote Kelley.

"The first attempt to use PCAs to collect Federal taxes came in 1996 and 1997, when Congress authorized IRS to conduct two pilot projects testing the use of PCAs to collect tax debts. The 1996 pilot was so unsuccessful it was cancelled after 12 months. Contractors participating in the pilot programs were found to have regularly violated the Fair Debt Collection Practices Act, and the program resulted in a $17 million net loss."

Taxpayer abuse concerns: She also elaborated on the noncompliance of PCAs with federal laws created to protect consumers. Private collection of tax debts on a commission basis, wrote Kelley, led to taxpayer abuse.

Between September 2006 and March 2009, the IRS received dozens of taxpayer complaints against the PCAs, five of which were confirmed by an IRS Complaint Panel to be serious violations of law, wrote Kelley.

In one instance, she noted, private collectors made 150 calls to the elderly parents of a taxpayer after the collection agency was notified he was no longer at that address. In addition, penalties totaling at least $10,000 were imposed by the IRS on the PCAs for violations against taxpayers, and one of the three original private contractors was dropped by the IRS for "dubious practices."

"The IRS union is already opposing the use of private contractors to collect taxes that's part of the proposed highway bill. Meanwhile, the IRS just had one of the worst filing seasons for customer service on record, according to the agency's own taxpayer advocate," said Grassley in a statement on his Senate website.

"The number of 'courtesy disconnects skyrocketed' this last filing season. That means the IRS hung up on callers because it couldn't handle the calls. The private contractors would take on accounts involving taxes that are due and owed that are just sitting dormant right now. The IRS isn't even pursuing them. It seems unlikely to do so any time soon when it has trouble answering the phone from people who are trying to pay their taxes. It's hard to see the logic for the resistance."

Time running out: Capitol Hill has just more than a week to map a route leading to continued transportation payments. The Highway Trust Fund runs dry on July 31.

The House passed a short-term extension last week that would cover transportation projects through mid-December. The Senate is working on a six-year extension. Obviously, the two chambers will have to compromise to come up with a final short- or longer-term funding bill.

We'll have to see if private debt collectors will be passengers in the eventual funding vehicle.

There is an alternative solution to using PCAs for collections from delinquent taxpayers. The “Dept Capture” method provided by Settle4Less does not involve any collection methods. Through the company’s planned launch of the SettleTaxes4Less website upwards of $6 billion/year in unpaid taxes can be recovered without the need of contracting private collectors to go after taxpayers.