Greece's future, both financially and as part of the Eurozone, remains unclear as the Mediterranean country and its creditors struggle to come to an agreement on what should be done about its persistent inability to pay its bills.

In simplest terms, the Greeks borrowed more money than they can pay back. The New York Times offers a more detailed look at how Greece got to this financial crisis point. At issue now is a three-year bailout of 53.5 billion euros, or $59 billion.

It's not a new problem. Greece is seeking its third bailout since 2010. It received a combined €240 billion ($268 billion U.S.) the other two times it ran out of money.

So European leaders are understandably hesitant to provide more funding without assurances that Greece is serious about restructuring its finances.

Bad tax collection efforts: One thing, however, is clear in every analysis of the Greek crisis: The country has done a terrible job over the years of collecting taxes that could have helped it pay down its debt.

Before Greece's international creditors will even remotely consider giving the country more cash, they're demanding that, in part, the country implement a more robust tax-collection regime to clamp down on tax evasion.

This means much more than simply enlisting Greek tourists and students to act at tax spies as they wander across the country.

Greece needs a substantive collection system that compels its citizens to declare their real incomes and pay the taxes they owe. That won't be easy.

Tax evasion commonplace: "For every dollar that is reported, 80 cents is not," Adair Morse, a professor at the Haas School of Business at the University of California in Berkeley, told CBS' Money Watch.

Morse knows of what he speaks. He helped author "Tax Evasion Across Industries: Soft Credit Evidence from Greece," a report that found tax evasion was most prevalent among Greece's highly educated professionals like doctors, lawyers, engineers and accountants.

How bad is the collection crisis?

In a look at what led to the Greek debt debacle, a recent Washington Post story included a graphic that indicated that 89.5 percent of Greece's tax receipts went uncollected in 2010. 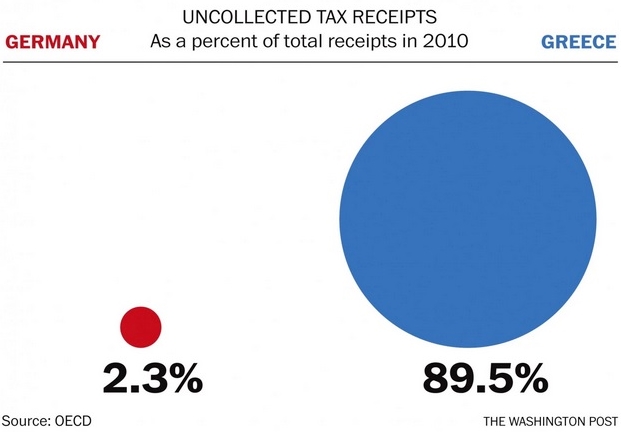 Figures don't lie, but...: The BBC, however, says that's not quite right.

Richard Murphy, a chartered accountant, political economist and author of the blog Tax Research UK, told the BBC that the reason that the figure was so large is because of the way the Greeks have been keeping their accounts.

"Sensible tax authorities take a view on this issue every year and say, 'We'll write off a proportion of our tax debts that we know we are never going to recover.' Greece, though, is recording this extraordinary large number because they haven't bothered to write off their old debts," said Murphy. "This is an accounting anomaly."

And while Greece does have a "massive" tax collection problem, Murphy says the country hasn't been failing to collect 89.5 percent of taxes owed in any one year.

Anomaly or not, that percentage is striking enough to earn recognition as this week's By the Numbers figure.

Perhaps any bailout deal that is struck, and today is the deadline, will include requirements that Greece not only strengthen its tax collection system, but clean up its accounting system, too.