Most CPAs report having clients who were tax ID theft victims
Plus, steps to take if you were, or become, one of those identity theft victims

Every day seems to bring a new report of another security breach that exposes millions to potential identity theft.

Even Uncle Sam is not immune, as evidenced by hackers getting hold of Office of Personnel Management records and taxpayer data from the Internal Revenue Service's online "Get Transcript" option.

Now we have yet another report from folks on the tax front line as to just how widespread tax identity theft is.

Sixty-three percent of CPAs who responded to the survey in May said that at least one of their clients was a victim of tax identity theft during the just completed filing season.

But the 2015 tax software survey, conducted in May by The Tax Adviser and Journal of Accountancy, also had a bit of reassuring news.

Most of the accountants who had clients with tax ID theft issues said that the victimized group accounted for less than 5 percent of their clients.

Let the IRS know there's an identity issue: If you are among that percentage of tax identity theft victims, you need to get proactive ASAP.

When you suspect that someone has used your Social Security Number to file for a fraudulent tax refund, or the IRS sends you a notice or letter indicating a filing issue that seems suspicious, contact the agency immediately and let it know, yes, there is a problem.

Start by calling the IRS Identity Protection Specialized Unit, aka IPSU, toll-free at 800-908-4490 to report the fraud. IPSU specialists will work with you to get your tax return filed, get you any refund you are due, and protect your IRS account from identity thieves in the future.

In order to get that process going, IPSU will ask you to file Form 14039, IRS ID Theft Affidavit, and/or a copy of the police report if you filed one with your local authorities. 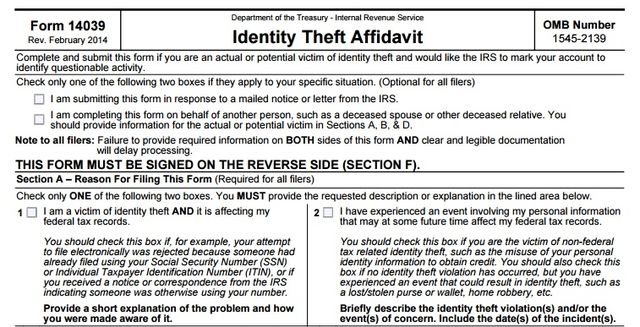 You'll also want to send the IRS proof of your identity, such as a copy of your Social Security card, driver's license or passport.

If you haven't yet filed your tax return, ask the IRS to provide you with an Identity Protection Personal Identification Number, or IP PIN. Use that number on your legitimate Form 1040 -- enter it near the signature line -- to alert the IRS that it is really you filing the income tax return.

And as for that return following the theft of your tax identity: file an old-fashioned paper one.

Start and maintain a record of the actions (calls, letters, emails, etc.) of the tax identity fraud reporting/recovery actions you take. Keep copies of the communications in your files.

Contact other authorities: In addition to working with the IRS to clear up the false return/refund issued in your name, you'll also want to take additional steps to limit the potential damage from identity theft. These include:

Yes, that's a lot of work. But it must be done if you're to limit and repair any damage to your good financial name and your solid tax paying status.

In working with the IRS to resolve a tax identity matter for their clients, 39 percent said the process was difficult or very difficult.

That corresponds to the recent findings of National Taxpayer Advocate Nina Olson, detailed in her midyear report to Congress, released on July 15. In that report's discussion of taxpayer identity theft, Olson calls for the IRS to provide ID theft victims with a single point of contact.

As I blogged last this week at my other tax blog, many tax identity theft victims now have to call the IRS multiple times and talk with several employees about different aspects of their case. This cumbersome process often leaves taxpayers feeling victimized a second time by the IRS, writes Olson.

That was how some of Lori Marrs' clients felt. "The issue was not created by them, and yet they felt that the IRS treated them as though they had done something wrong," Marrs, a CPA with Marrs Bergquist, CPAs in Las Vegas, told the Journal of Accountancy.

No one responsible at IRS: Even worse, says Olson, the involvement of multiple IRS employees means that none is held accountable for the resolution of the case.

This division of responsibilities in dealing with tax ID theft instances often leads to the corrective process taking a disturbingly long time, adding to taxpayer worries and frustrations.

A single, dedicated point of IRS contact would alleviate this glaring gap in IRS service to tax ID theft victims.

It's a commendable goal, but likely one that will take some time -- and money that will be grudgingly provided by Congress -- to accomplish.

In the meantime, the best any of us can do is to take steps to avoid becoming a tax ID theft victim in the first place. If that fails, get ready to work long and hard, on your own or with a tax pro's help, to clean up the mess.

More tax thoughts this week: Also this week at Bankrate Taxes Blog, I looked at why the mortgage interest tax deduction is safe this election cycle.

Hint: It has a little something to with wealthier folks benefiting more from the tax break, along with the fact that those richer, mortgage-deducting individuals also tend to contribute more generously to politicians' campaign war chests.

My tax thoughts at Bankrate Taxes Blog usually are posted on Tuesdays and Thursdays. If you miss them there, pop in here over the weekend -- or a day early if I get industrious! -- for highlights and links.