IRS commissioner ready to take on those who want him fired

"I apologize for not being able to take all your questions, but I have a flight to catch. I have friends waiting for me in Washington. In case you didn't notice, a handful of them think we need a new commissioner. I don't want to disappoint them."

That was Internal Revenue Service Commissioner John Koskinen wrapping up the Q&A session that followed his address this afternoon to tax professionals attending the IRS Nationwide Tax Forum in Denver. 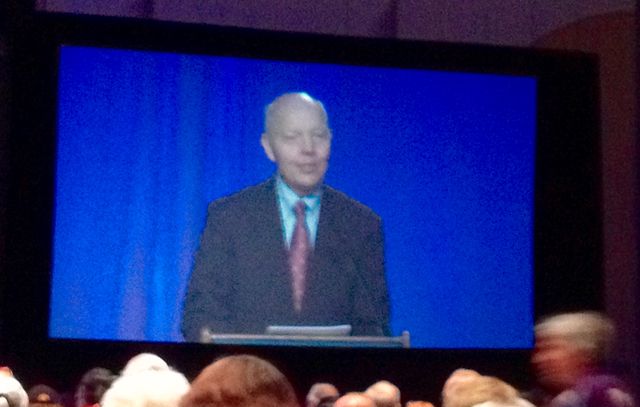 Yeah, so I'm not a good photographer, especially in a huge room and using an iPhone camera. Sue me (not really!). But that is IRS Commissioner John Koskinen speaking today, July 28, to tax practitioners in Denver.

When I learned that the commish would be speaking, I naturally wondered if he would address the effort by the Republican members of the House Oversight and Government Reform Committee to have him fired.

Nah, I thought. It just happened and he's got other issues to discuss with the hundreds of tax preparers gathered here for three days to brush up on their tax knowledge.

But he did mention it. Sure, it wasn't much, but what else would he, could he say right now?

And I took Koskinen's reference to not wanting to disappoint Oversight Chairman Rep. Jason Chaffetz (R-Utah) and his GOP colleagues on the panel as an indication that the commissioner likes his job and is ready to face off with the lawmakers in order to keep it.

Stay tuned. This could get fun.