Internal Revenue Service Commissioner John Koskinen apparently was a bit too optimistic a few months ago when he declared his agency had turned a corner when it came to the problems it had encountered. 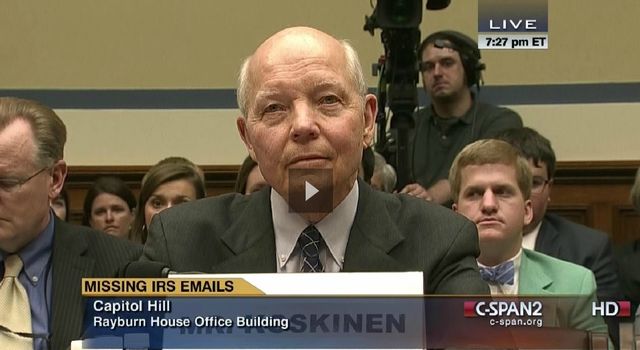 IRS chief John Koskinen at one of his many appearances before the House Oversight and Government Reform Committee. The Republican leader of that panel and 20 of his colleagues are tired of Koskinen's testimony and now say he should be fired for his part, or lack thereof, in resolving the Tea Party tax-exempt application scandal.

Congress, particularly Republicans in the House, continues to focus on the Tea Party scandal. In case you're new here, this is the mess the IRS made in reviewing organizations' applications for the tax-favored 501(c)(4) status.

While the agency did improperly handle requests from some liberal and progressive groups, too, the initial finding by the Treasury Inspector General for Tax Administration found conservative groups got inordinate attention that delayed their tax-exempt requests.

Time for Koskinen to go: Now, some 810 days into the scandal by TaxProf's calendar count, the House Oversight and Government Reform Committee is making it personal as far as Koskinen is concerned.

Committee Chairman Rep. Jason Chaffetz (R-Utah) and 20 of his panel colleagues have written President Obama asking him to remove Koskinen from office.

The 32-page letter details the many reasons the Representatives want the IRS chief ousted. At the core of the request are lingering questions about emails on the 501(c)(4) process from and to Lois Lerner, who headed the agency's tax exempt unit when the application scandal broke in May 2013.

Throughout the continuing email imbroglio, members of Congress (again, mostly on the House side of Capitol Hill) have repeatedly expressed their anger with and distrust of how Koskinen has dealt with the matter and their investigations into it.

Now they say they've had enough and want Koskinen gone.

"At best, Commissioner Koskinen was derelict in his duties to preserve agency records. At worst, he and the IRS engaged in an orchestrated plan to hide information from Congress," wrote Chaffetz. "Given Commissioner Koskinen's obfuscation and misleading statements to Congress, and the false claims that key evidence was permanently destroyed, the result has been an unnecessarily protracted investigation."

"More importantly though," continued the committee's chairman, "the American people will never know all the facts surrounding the agency's targeting of conservative tax-exempt 501(c)(4) groups. This is an unacceptable outcome and one that demands those responsible be held accountable."

Democrats say GOP is overreacting: The Democratic minority on the committee is not impressed. Rep. Elijah E. Cummings (D-Md.), Oversight's ranking minority member on the committee said the Republican members of the panel had not provided any new information in their call for Koskinen's ouster.

"This is a strange, oddly-timed rehashing of conspiracy theories that were debunked by the Inspector General himself," said Cummings, noting that TIGTA found no evidence to back-up Republican claims of political motivation, White House involvement, or intentional destruction of evidence regarding Lerner's emails.

"Calls for Commissioner Koskinen to step down are nothing more than a manufactured Republican political crisis based on allegations that have already been debunked," said Cummings.

Expect the same reaction from Obama. There's zero chance he'll fire Koskinen, a man for whom he had high praise when he nominated him in August 2013 to run the troubled agency.

No firing, continued political posturing: Chaffetz and his frustrated GOP committee members know that, too, but they had to ask. And they promise that if Koskinen keeps his IRS post, they will consider contempt charges against or impeachment of the commissioner.

I agree that the IRS and its leadership should be above reproach. But I also believe that Congress needs to quit playing politics with an agency that affects, either directly when we pay our taxes or indirectly in the amount of money it collects, the lives of every single American.

I'm not naïve enough to think that will happen. And I am cynical enough to believe that Chaffetz and his fellow Republicans on and off the Oversight panel all will keep the pressure on and drag out their continued investigations until the November 2016 elections.