Are you hitting the road this long Independence Day weekend? You are not alone. AAA Travel projects 41 million Americans will journey 50 miles or more from home during the Independence Day holiday weekend, with more than 80 percent of them traveling by auto.

That's the highest level of Fourth of July road trippers since 2007. The number of drivers this holiday weekend also is nearly 14 percent more than those who took auto trips over the Memorial Day holiday weekend.

The increase in July 4th motorists also is good news for gasoline producers, as well as the treasuries in seven states that on July 1 hiked their fuel excise taxes. 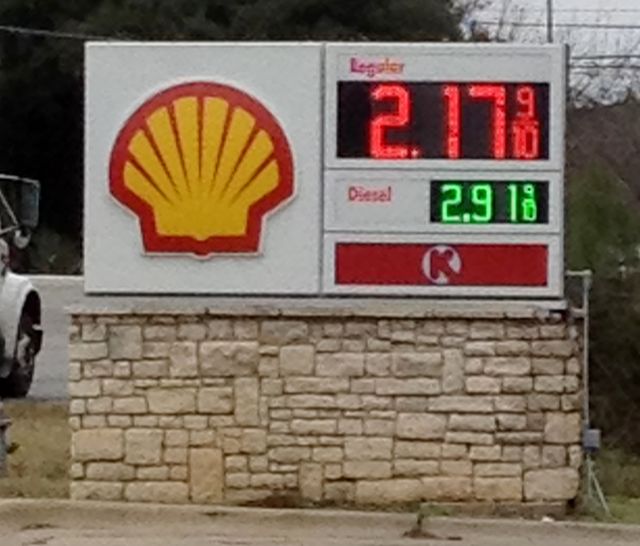 Stop! Do not head out toward my house. Gas at my neighborhood Shell station is not that inexpensive now. I snapped this photo back in December 2014. A gallon of regular unleaded now costs around 40 cents more, but that's still below today's national average, per AAA, of $2.77 per gallon.

Idaho has the largest gas tax increase at 7 cents per gallon. Georgia with a 6.7 cent gas tax hike is close behind.

Coming in at less than a penny per gallon are gas tax hikes of 0.5 cents in Nebraska and 0.35 cents in Vermont.

Diesel taxes up, too: If you drive a diesel-powered vehicle, you'll pay more for that fuel in California, Georgia, Idaho, Maryland, Rhode Island and Nebraska.

That's right, drivers of gas or diesel vehicles in Georgia, Idaho, Maryland, Rhode Island and Nebraska, you are totally out of fuel tax luck. Levies on both those liquid fuels went up on July 1 within those state borders.

In California, however, drivers of gasoline-fueled vehicles get a tax break, while diesel vehicle owners will pay more at the pump. The Golden State's diesel tax increased by 2 cents per gallon, but its gas tax dropped by 6 cents per gallon, thanks to a state law linking the gas tax rate to gas prices.

If differences with the Michigan House can be worked out, the taxes on gasoline and diesel fuel will be phased in over three years. Hikes of 4 cents per gallon will kick in this Oct. 1 and Jan. 1, 2016. A 7-cent increase will take effect on Jan. 1, 2017.

In May, Michigan voters rejected a ballot measure that would have increased the state's sales and use tax by 1 percent, from 6 percent to 7 percent, with the money to go toward fixing the state's deteriorating roads and bridges. I suspect they won't be happy with this tax increase either.

Gas tax cuts stopped in two states: And some drivers who had been expecting lower fuel taxes are disappointed.

Carl Davis, research director at the Institute on Taxation and Economic Policy (ITEP), notes on the Tax Justice Blog that automatic gas tax cuts had been scheduled to take place in Kentucky and North Carolina. Lawmakers in both of these states, however, decided to instead place a floor on their gas tax rates.

The reason for keeping the taxes at current rates was to minimize the loss of revenue designated for infrastructure projects.

That intervention was applauded by ITEP and Citizens for Tax Justice, which argue that such state action is crucial right now since "Congress' commitment to adequately funding infrastructure remains highly uncertain."

Federal highway fund impasse: That's right. The U.S. House and Senate still are squabbling over how to replenish the Highway Trust Fund.

As the fund faced expiration at the end of May, Congress agreed to a short-term extension for the nation's supply of roadway, bridge and other infrastructure money through July 31.

The nonpartisan Congressional Budget Office projects that without Congressional action the fund will face insolvency sometime this summer. The U.S. Department of Transportation's Highway Trust Fund ticker projects that the account's balance will fall below $4 billion toward the end of July, and $1 billion also around the end of August.

A handful of federal lawmakers, as well as truckers who use the country's highways the most, support an increase in the federal gasoline tax, which has been stuck at 18.4 cents since 1993, to refill the fund. That, however, is not going to happen.

Other ideas on how to pay for transportation and infrastructure projects range from taxes on corporate profits stashed abroad to a variety of spending cuts in smaller, less controversial areas of government, such as extending customs user fees, requiring distributions from inherited IRAs and revoking passports for taxpayers with tax delinquencies.

Look for the roadway fight to heat up when lawmakers return to Washington, D.C., after their July 4th holiday break.

Maybe if Representatives and Senators drive across their respective districts and states, they'll come up with some more ways on how to fix those deteriorating roads.