Disney gets 30-year tax exemption deal from Anaheim
Should cities, states give businesses tax deals to lure, keep them?

Disney is known for its princesses. That's fitting, because from a corporate tax position, the entertainment behemoth is a king. 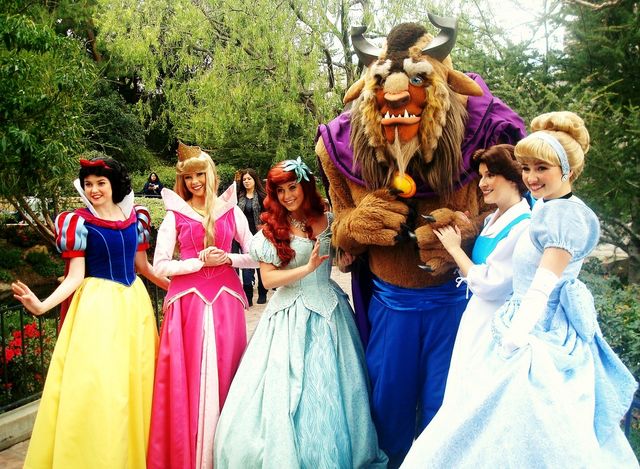 Beast and the Disney princess beauties by Jennie Park via Flickr

And boy is it good to be king. Disney just got a royal tax deal from Anaheim.

Tax deal for possible future tax: The Southern California city that is home to Disneyland just extended its entertainment tax agreement, which has been in place since 1996 and which was set to expire next June, with Disney for 30 more years.

In the original deal almost 20 years ago, Anaheim promised that if it ever enacted an entertainment tax, it would give Disney an incentive payment equal to whatever the company wound up paying in taxes.

In exchange for continuing this arrangement -- which, keep in mind, is for relief against a tax that has yet to be created -- for three more decades, Disney agreed to invest $1 billion in its theme parks by then of 2024. Expansion must begin by the end of 2017.

Locking down Disney: I get it. Disneyland is Anaheim's claim to fame. Sorry Angels, but even you admitted you don't register on the local radar by changing your Major League Baseball team's official name to the stupid geographically confusing Los Angeles Angels of Anaheim.

But really, city officials, if you didn't offer a break on a possible future tax, just where do you think Disney would take its properties?

And even if the theme parks and surrounding lodgings didn't move, do you really think Disney would let them fall into disrepair? It's going to make the upgrades anyway, and claim tax federal (and probably other state) tax benefits for those.

Disney doesn't need to be bribed with taxpayer money to do what it already had planned.

Jobs, jobs, jobs: The closeness of the city council's vote, as well as the overflow crowd that argued for and against the tax break extension during the lengthy July 8 public hearing, indicated some misgivings.

Three Anaheim council members voted to approve the deal. Two, including the city's mayor, voted no.

Murray apparently was referring to potential taxes that would be needed to pay for transportation needs. Part of Disney's promised expenditures also would go toward street improvements surrounding Disneyland and its California Adventure, as well as a 5,000-space parking lot.

Again, who will this roadwork that would it easier to get to Disney operations help? You got it. The House of Mouse.

Those who agreed with Murray and two of his council colleagues included workers who would benefit from the estimated (in a city-commissioned report) that 10,206 construction jobs would be created in the first phase of Disneyland Resort's expansion. Almost 2,000 more jobs would be created, according to the report, as part of ongoing operations.

Unwisely limiting tax options: Others, however, were concerned about a long-term deal that would tie the hands of future city councils without regard to what future city and economic concerns might be.

Tait supported the tax exemption in 1996, but voted last week against continuing it in part because of the city's current $500 million unfunded pension obligation.

Downsides of corporate tax deals: Cities nationwide, as well as state governments, make sweetheart tax deals all the time with big businesses to keep them or get them to relocate within their borders.

Such tax bribes, however, don't necessarily work out for all citizens.

Some opponents say the deals often are thinly veiled patronage programs, with corporate friends (and potential high-dollar campaign donors) of powerful politicians getting the best breaks at taxpayer expense.

Some Anaheim residents were concerned that the corporate entertainment giant would pocket most of the savings rather than spread it among line workers at the parks.

Tax bribes not decisive: Others argue in general against such corporate tax break deals. They contend that responsible companies -- and don't we all want good corporate citizens as our neighbors? -- stay or move based on many factors other than taxes.

Why then should taxpayers have to subsidize business activity that would happen on its own?

And the most cynical among us, and I say "us" because I'm part of this group, say that the companies simply play locations against each other to wring the best breaks they can out of the place they plan to call home regardless. I'm looking at you, Seattle-based Boeing.

What do you think? Are you willing to bribe a big business with tax breaks for some promised or perceived benefits? Or should we insist our lawmakers not give in and even, as some have suggested, ban states and cities from offering big tax breaks for corporate residency decisions?

When our company proposed building a manufacturing plant in one of the poorest counties in the state, we insisted on getting some sort of property tax relief. Our plant would have added a substantial amount of taxable value to the county. But because corporations cannot vote, we worried that without property tax relief we would, as one corporate officer put it, be in the position of “gold plating” the schools. In other words, the people of the county could take advantage of the large increase in the property tax base by voting for large increases in property tax without changing the amount they would pay by any significant amount. In the end, we agreed to a fee-in-lieu of taxes that fixed the amount we paid for a period of twenty years.

The twenty years have now passed and the county is no longer listed as one of the poorest in the state.