NASCAR fans are gearing up for tonight's night race at Daytona International Speedway. Still referred to as the Firecracker 400 by veteran stock car fans, the corporately renamed Coke Zero 400 marks NBC's return to the sport after a 10 year hiatus.

While some race fans are grumbling because the top-tier NASCAR race was bumped from its traditional first Saturday night in July to Sunday to capture a bigger TV audience, it still should be a good show.

And it will give those at the track as well as those of us watching on television a chance to see what's happening on and off track at NASCAR's most recognizable venue.

Overhaul for NASCAR's Super Bowl home: Daytona is 56 years old and the five and a half decades of wear and tear is evident. Heck, the hubby and I noticed the disrepair when we attended races there while living in Florida.

So rather than applying a few asphalt Band-Aids, the 2.5 mile track is undergoing a $400 million upgrade. 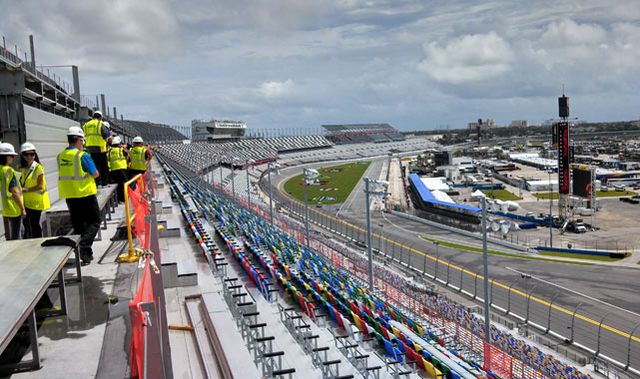 Construction crew members look out over the Daytona Speedway grandstands and infield. The Florida racetrack, home of NASCAR's biggest race, the Daytona 500, and the July 4th-themed summer night race, is getting a major overhaul. Photo courtesy Kickin' the Tires with Jerry Jordan.

Dubbed Daytona Rising, the project includes the rebuilding of the front stretch of the grandstand. When completed in 2016, fans will enjoy new large-scale social areas and technology upgrades for watching the action and sharing it via social media.

In addition, Daytona International Speedway Corp. and Jacoby Development are building One Daytona, a $1.2 billion, 181-acre, mixed-used entertainment, dining and retail center across from the speedway that will operate year-round.

Uncle Sam, fan contributions: Race fans, of course, will help cover some of those costs.

Spectators at this year's season opening Daytona 500, NASCAR's Super Bowl equivalent, paid between $89 for a single admission and $680 for a four-day ticket. Look for those prices to go up in 2016, especially with fewer seats available under the new configuration.

Uncle Sam also will help cover some of the bill. The tax code offers businesses ways to write off improvements.

Tax help for track upgrades: When fixed assets are placed in service, a company can recover the cost under depreciation.

The key is the time period over which an asset is depreciated, known as the asset's expected useful life. Not surprisingly, there is a wide variety of useful lives for similar types of assets.

The recovery periods for tax purposes is detailed in the extensive listing of fixed asset types in Internal Revenue Service Rev. Proc. 87-56. You can find this listing in Appendix B of IRS Publication 946, How to Depreciate Property.

Among the items included in Pub. 946 are motorsports entertainment complexes. A qualifying venue, according to the IRS publication, "is a racing track facility permanently situated on land that hosts one or more racing events for automobiles, trucks, or motorcycles during the 36-month period after the first day of the month in which the facility is placed in service. The events must be open to the public for the price of admission."

7-year depreciation schedule: For years, tracks have been able to depreciate their new construction over just seven years, faster than allowed for most other businesses.

The track option is part of the extenders package of tax measures that technically are temporary, meaning they periodically expire and must be extended by Congress, hence the legislation's name.

The more favorable depreciation period for race tracks first appeared as a temporary tax break in the American Jobs Creation Act of 2004. You might remember that year's presidential election, during which then-President George W. Bush and then-Sen. John Kerry (D-Mass.) were seeking support from the so-called "NASCAR dads."

Since that election, the provision has remained part of the extenders bill, being renewed every year or two. All the tax extenders expired on Dec. 31, 2014, and are awaiting further action in the 114th Congress.

Not just for NASCAR tracks: While it's popularly known as the NASCAR tax break, all race tracks that host all types of racing benefit, not just those owned by the stock car governing body.

Race industry lobbyists say there are roughly 1,200 auto racetracks in the United States. Most of them are small, local operations that aren't affiliated with major professional racing leagues.

When these small tracks are able to write off costs over a seven-year span, they can put money back into their businesses, argue advocates of the racetrack break, spurring the economies in their communities.

All auto track owners, from the giant Daytona to the Central Texas Speedway in Kyle, the self-proclaimed home of fast cars and hot guitars just south of Austin, would love to see the seven-year depreciation provision made permanent so they could make tax and construction plans for their facilities.

Stabenow dropped S. 1624, the Motorsports Fairness and Permanency Act, into the legislative hopper on June 18. It has nine bipartisan cosponsors and is awaiting consideration by the Senate Finance Committee.

It is identical to Reed's H.R. 1549 of the same title, which he introduced on March 23. The House version, pending in Ways and Means, has 25 cosponsors from both sides of the political aisle.

Stand-alone law, tax reform or extender route: The House of late has been more inclined to approve measures that were in the extenders as separate pieces of legislation.

There's also the possibility that the racetrack provision could be folded into comprehensive business tax reform.

Most likely, however, is that the extenders package will be renewed again for at least the 2015 tax year.

I wouldn't be surprised to see the laws pushed forward through 2016 so that Senators, Representatives and presidential candidates don't have to worry about them during next year's election/re-election campaigns.

Whatever route the tax break takes, NASCAR and other racetrack owners are hoping they soon get the green flag to keep depreciating their course improvements on the seven-year schedule.