A couple of years ago I made some lifestyle changes to improve my overall health. I started exercising more and I reduced sugar consumption.

That second part was relatively easy. All I had to do was drink no more than one can of Coke -- and yes, while the brand name is how we Texans refer to all sodas, I truly am a Coca-Cola devotee -- a day. 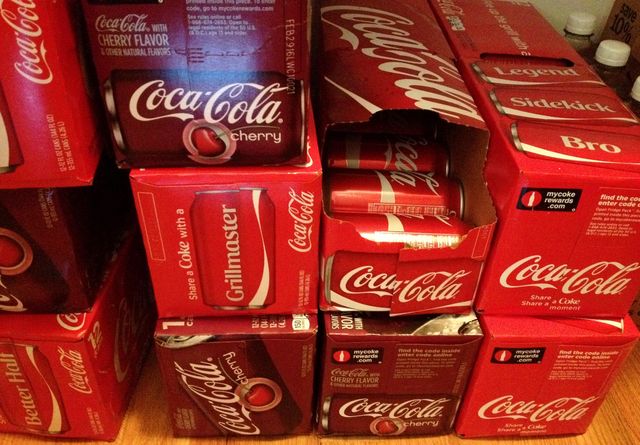 The Coca-Cola collection in our kitchen pantry. The hubby occasionally mixes in a can of Cherry Coke. I stick with the original. And yes, I have cut consumption. Our stash is big because we stock up when they go on sale.

It paid off. I lost some weight. I could walk or hike further without getting winded. And my blood pressure and cholesterol numbers found the normal range again.

But I hate my Coke limit. I love the beverage. I would drink it at every meal, breakfast included, if I wasn't committed to staying healthy.

"Healthy" taxes again a topic: The health benefits of less sugar is one of the arguments that advocates of a soft drink/sugar-sweetened beverage tax regularly make.

Maybe it's because it's summer and we tend to reach for more cold ones now, but the move to collect new or more tax on these beverages is heating up again.

Groups nationwide rallied last November after Berkeley, California, voters agreed to penny-per-ounce tax on sugary beverages, the first time any U.S. city had agreed to such a levy.  It took effect on Jan. 1.

Pro-tax advocates also point to Mexico's soda tax. The one-peso-per-liter tax on sugary beverages, as well as an 8 percent sales tax on junk food, went into effect in America's southern neighbor in January 2014.

A study issued last month by health economists at the University of North Carolina at Chapel Hill found that during the first year of Mexico's soda tax, purchases of sugar-sweetened beverages dropped on average by about 6 percent.

Additional investigation is needed to see if the reduction in sugary beverages has led to a corresponding decline in Mexico's obesity rate. But health care experts are hopeful.

But, says Brownell in an op-ed piece this week in the Wall Street Journal, "obesity and diabetes are highly regressive diseases. Tobacco taxes helped prevent cancer and heart disease among those least able to afford the medical care these diseases require."

Plus, argues Brownell, the revenue from soda taxes could be used to help lower earners afford to buy healthier food products such as fruits and vegetables.

Money at top of Alabama list: While Alabama Gov. Robert Bentley may well be concerned about the health of his state's residents, right now he's looking at a soda tax from a primarily fiscal perspective.

"Legislators have only one job, and that job is to pass budgets," said Bentley at a press conference before Alabama lawmakers convened this week for a special session. To that end, the Republican governor issued a proclamation calling for, among other things, changes to the state's business privilege tax, a cigarette tax increase and a new beverage tax on soft drinks.

Altogether, the variety of taxes and changes suggested by Bentley would total about $320 million.

It's a comment on the difficult financial straits many states are finding themselves in when yet another GOP leader calls for new or increased taxes, even ones that could be wrapped in a nobler, good-for-folks cloak.

Everyone knows that the health benefits are a minor part of the deal when state budget officials are crunching numbers. But sometimes that policy sweetener is enough to mask the bad taste of creating or adding to a tax.

As for me, I've cut as much as I can. A tax is not going to make me give up my daily Coke!