A taxable toast to Independence Day!

Ins explaining the United States to non-Americans, the quirky online comic website The Oatmeal notes that the Fourth of July is the day we celebrate our independence through alcoholism, concussive explosions and by scaring the crap out of our pets. 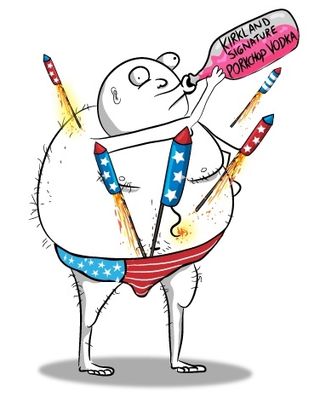 I thought the characterization was just part of cartoonist Matthew Inman's exaggeratedly offbeat sense of humor, which is further demonstrated by his July 4th drawing there to the left.

But Inman nailed it.

All across the country this long weekend we have the fireworks and terrified pets and, yes, the over-consumption of booze.

Biggest booze days: Independence Day is one of the biggest days for alcohol consumption in the United States, according to the latest study by breathalyzer manufacturer BACtrack.

BACtrack's fourth annual Alcohol Consumption Report, which is based on data collected anonymously from users of the San Francisco-based company's products, reveals that the Summer Solstice and July 4th are tied for the booziest days of the year.

I can see how the official start of the summer season offers some extra drinking time. It is, after all, the longest day of the year. Drinks until dark!

And with Independence Day being the most important in our country's history, it's also no surprise that folks want to celebrate by raising a glass or two or more.

The holiday this year could be especially intoxicating since July 4, 2015, falls on Saturday. The BACtrack report says that eight of the 13 biggest drinking days of the summer are Saturdays.

That Saturday occurrence also means most of us have an extra day to celebrate. Today, July 3, is the official government holiday, meaning millions of us have Friday off, too.

Toasting and taxing: All this toasting of our national independence also makes state treasurers very happy. State tax collectors pocket a portion of our beer, wine and hard liquor purchases.

Is it just me, or do you also get a kick out of the continued connection of beverage taxes to Independence Day?

We shoot off fireworks and raise taxable beverages to commemorate our break from Great Britain that was prompted in part over a tax on tea. Of course, for better or worse we now at least have representation for today's alcoholic beverage taxes.

If you want to see just how much in tax you're paying for your toasts this Fourth of July and the rest of the year, check out the maps created by the Tax Foundation. 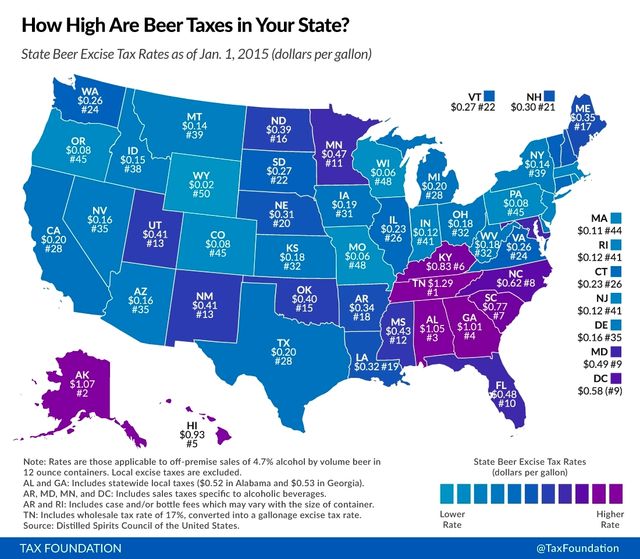 If you prefer a glass of Cabernet or a shot of whiskey, you also can check out the Tax Foundation's state-by-state excise tax rates on wine and hard liquor.

Don't drink and drive: Whatever beverage you choose to celebrate the Fourth of July, drink it responsibly.

And be extra careful. More people are out and about and also imbibing this long holiday weekend, with way too many of them getting behind the wheel of a car.

In fact, July 4th often beats out New Year's Day as the deadliest day on American roads, according to the National Highway Traffic Safety Administration. More than half of those fatal accident deaths are due to alcohol.

Not to bring down your buzz, but I'd sure like to have all y'all back reading the ol' blog, even with a hangover, on July 5.