The Supreme Court has ruled: Marriage for all

In an historic 5-4 decision, the U.S. Supreme Court ruled today that all couples, regardless of gender, have the right to be married in all 50 states. 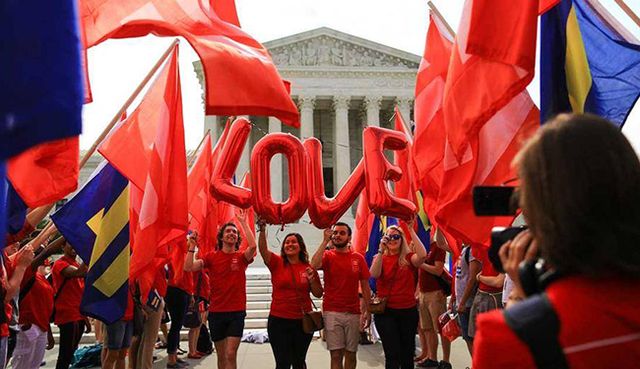 The victory for marriage equality advocates was expected, given the number of lower courts that have ruled that way and the dramatic shift in public support for same-sex marriages. However, no one wanted to get out ahead of this Supreme Court, which has had a habit of issuing decisions, read Obamacare, that many have found surprising.

Chief Justice John Roberts, who was key in yesterday's ruling that deemed the Affordable Care Act legal, was on the dissenting side this time. Joining him were Clarence Thomas, Samuel Alito and Antonin Scalia, who wrote the formal court response in opposition to the majority ruling.

Emotional reaction at the Court: Hundreds of marriage equality were at the High Court this morning and celebrated the ruling. They overwhelmed the court's security officers and filled the national courthouse's steps where they spontaneously burst into a rendition of The Star Spangled Banner.

Many of the folks in Washington, D.C., no doubt will return to their homes to finalize wedding plans that they now can hold wherever they wish in the United States.

In four of those states -- Ohio, Kentucky, Tennessee and Michigan -- marriages should be immediate. These jurisdictions were part of the collection of cases, referred to as a group under the Obergefell v. Hodges lawsuit, that the Supreme Court decided today.

In the other nine states, however, some additional legal actions most likely will be necessary in order for the Supreme Court's ruling to take effect.

Here in Travis County, home of the capital of Texas, same-sex marriage supporters also are celebrating. A few also have headed to county offices to purchase their marriage licenses. That step, however, is on hold here in Austin despite the ruling.

The delay is not merely a political move, although that certainly plays a part. From a legal standpoint, today's Supreme Court's decision technically only applies to the four states covered in the cases the justices decided.

Adam Romero, senior counsel at UCLA's Williams Institute, told NPR that further court actions are necessary in most of the states that still banned same-sex marriage in order for Supreme Court ruling to apply.

Despite the states' hesitancy, most legal experts expect the required legal actions to be acted upon quickly.

After the honeymoon, taxes: Once more couples join the married ranks, they'll face the mundane part of marriage. I get to say that since the hubby and I exchanged our vows more than 30 years ago!

Part of that practical aspect of marriage is tax filing.

"The right to marriage for same-sex partners in all 50 states brings with it full access to all the same tax benefits and privileges that have traditionally been available only to married heterosexual couples," said Nanette Lee Miller, founder and co-leader of the Marcum group.

"For the first time, all same-sex married couples will be able to take full advantage of joint tax filing and estate planning to minimize their expenses, maximize their net incomes and protect the financial future they envision for themselves and their families," Miller added.

So same-sex couples should, after they talk to their wedding planners, put in a call to their tax professionals. As Miller notes, "There is still a lot of work to be done on the tax planning and strategy front as same-sex couples evaluate the impact of marriage on their current and future finances."

As for the rest of us, all we have to do is be on the lookout for the wedding invitations.