Any time there's a big event, it's always followed by clean-up tasks.

That's true for all the wedding celebrations held after the Supreme Court's granting of nationwide marriage equality in its June 26 Obergefell v. Hodges decision.

It's also true of the tax laws that now apply to all the new same-sex newlyweds. Specifically, the Internal Revenue Code, officially known as Title 26 of the U.S. Code, needs a major search-and-replace so that references to "husband and wife" become "spouses." 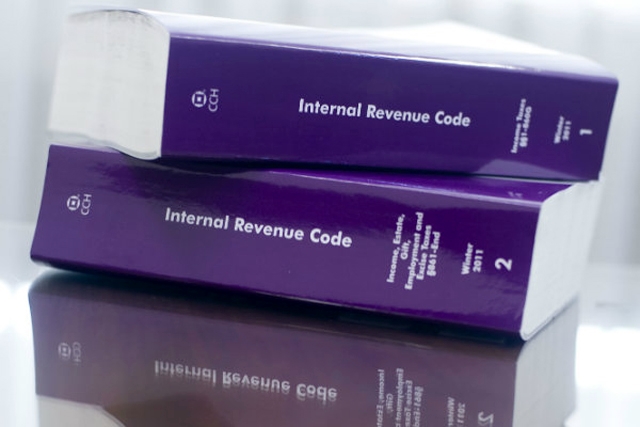 You can peruse the tax code at either the Government Publishing Office's 3,837-pages PDF document or the House of Representative's searchable online version of Title 26, Internal Revenue Code.

Marriage expansion rewrite: Sen. Ron Wyden (D-Ore.), the ranking minority member on the Senate Finance Committee, is already working on getting the new nomenclature on the books

Following the historic change in how marriage is defined in all 50 states, Wyden dashed off a letter to his fellow Senators asking them to support the tentatively named Marriage Equality for All Taxpayers Act.

Wyden's staff is still drafting the specific legislative language, but essentially it would remove all gender-specific references to marriage from the tax code.

"It is high-time that Congress addresses the glaring fact that the tax code is replete with out-of-date references to marriage that no longer reflect the institution of legal marriage," Wyden wrote. "Such outmoded language arguably disparages those married couples who the Supreme Court has sought to protect and dignify by recognizing their constitutional right to marriage."

Change already underway at IRS: The Internal Revenue Service is well on its way to making tax-filing gender neutral.

Following the High Court's 2013 decision that erased the Defense of Marriage Act (DOMA) definition of marriage as only between a man and a woman, the IRS began accepting jointly filed federal returns from all same-sex married couples regardless of where they lived.

As part of that process, the agency also sorted through its documents, forms and Web pages to reflect the change. Still, a few items slipped through the revision process.

A quick online search still pulls up some "his wife" or "her husband" phrases. And some IRS Internet sections, notably the Husband and Wife Business and Election for Husband and Wife Unincorporated Businesses, need to be rewritten.

That shouldn't be too much of a cost or correction problem, though, even for a tax agency dealing with a depleted budget and staffing shortage.

The IRS doesn't print documents any longer. Instead they're all online to be downloaded by taxpayers, who can print them if they want to hold real paper versions.

And who knows. Perhaps the tweaking of the Internal Revenue Code with regard to same-sex marriage will serve as a good warm-up for the eventual overhaul of all individual tax laws.

State changes, too: Similar revisions also will be needed in the handful of states that collect income taxes but that held out when it came to married same-sex taxpayers.

But the good news for the states and Uncle Sam is that we've got half a year to get the forms etc. ready for the coming filing season. Even when taxes are involved, a lot can be accomplished in six months.

Big week at the High Court: The Supreme Court's landmark, albeit deeply divided, decision on the equal treatment of all marriages regardless of a couple's gender was just one key ruling issued last week.

The justices were a little more united in their 6-3 ruling that Affordable Care Act premium tax credits, aka subsidies, can be granted to health insurance policy purchasers at both the federal and state exchanges.

Last week at my other tax blog, I looked at High Court's same-sex marriage decision, as well as what the justices' Obamacare ruling might mean to that law's medical device tax provision.

Plus, before history was made at the Supreme Court building late in the week, I examined Cleveland's tax take during the Cavaliers' quest for the NBA championship.

I usually post my additional tax thoughts over at that personal finance website on Tuesdays and Thursdays, but sometimes on Fridays and other days, too, when there's a lot of tax news like last week.

Regardless of when my Bankrate Taxes Blog posts show up over there, you can usually find a synopsis and links here at the ol' blog on the following weekend.