Houston, we could have more flood problems

OK, how did I wake up today in my Austin house but in South Florida? This is the most humid and tropical feeling it's been in the 10 years we've lived in Central Texas.

Depending on what happens in the Gulf of Mexico in the next couple of days, it could get worse. 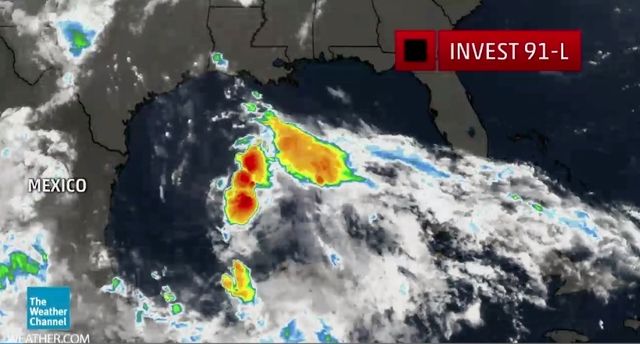 Screen shot from The Weather Channel's coverage of a developing tropical system that might turn into the second named storm -- it would be Bill -- of the season.

Hurricane hunters are still looking into the system, officially known at this stage as Invest 91-L. The National Hurricane Center says there's a 90 percent chance that it will increase in intensity enough to be named Bill.

More flooding likely in Texas: What's not so certain is where Bill might make landfall. Most of the Texas coast is bracing for the possibility of taking the hit.

If the system comes ashore at the southern end, closer to Corpus Christi, it will likely swamp more of Central Texas, which is still trying to recover from the deadly Memorial Day weekend floods.

Either way, time is running short to make preparations.

And don't think you're safe just because you're well inland. These systems tend to hold together enough after landfall to move across large swaths of the country, bringing heavy rains far beyond shorelines.

You can find lots of tips and resource links at the ol' blog's special Storm Warnings page. Check it out and stay dry or at least safe, now and throughout hurricane season (and beyond).

Meanwhile, since I've already made my storm preparations -- I'm trained well, thanks to six years of living in hurricane-prone Florida -- I'm returning to my quest of figuring out how I can get the beach within a 10-minute drive as long as we have to plow through such tropical air.