My fellow Texan Kinky Friedman, as well-known for his often outrageous comments and political dalliances as for his writings and music, declared his support for marriage equality because same-sex couples "have a right to be as miserable as the rest of us."

However, unhappily married gay and lesbian couples don't have the right in the Lone Star State to get a divorce. Or do they? 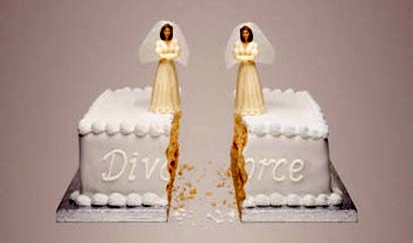 Texas, like 13 other states, does not sanction same-sex marriages. Neither does it recognize such marriages that were legally performed in other states. So, argue some Texas officials, the state cannot grant a same-sex couple a divorce.

No marriage so no divorce: That's the legal quandary that Angelique Naylor and Sabina Daly encountered. The women were married in Massachusetts and then moved to Texas. In 2009, a Travis County court granted the couple a divorce.

But in 2011 -- yep, two years later -- then Attorney General and now Gov. Greg Abbott filed an appeal with the Texas Supreme Court contesting the women's divorce. Abbott's argument was that since Texas does not allow or recognize same-sex marriage, it cannot grant a divorce to same-sex married couples.

Today, the state's high court decided to let the divorce stand. The ruling, however, doesn't clear things up when it comes to same-sex divorce in Texas.

Procedures, not merits: The court didn't decide on the legality of same-sex divorce or, for that matter, marriage. Rather, its 5-3 ruling was that Abbott did not have standing to intervene in the divorce case because the AG's office waited too long to get involved.

So although the court's decision means the divorce still stands on paper, Texas could still take the position that it's going to ignore it.

Another same-sex divorce appeal also was dismissed today, again on procedural not case merit grounds. The Texas Supreme Court refused to act in this second case because one of the men seeking to dissolve the marriage died earlier this year.

And the court's inaction in this second case further muddies the legal same-sex divorce water.

The Texas justices' suit dismissal of the second case leaves in place a lower-court ruling that invalidated the men's divorce because the Texas district judge lacked the authority under state law to recognize a same-sex marriage by granting a divorce.

So the Texas Supreme Court allows one divorce to go through and another to be voided even though both cases in two lower courts revolved around the same argument. Yeah, the law in Texas is as screwy as just about everything else here! And I get to say that because I'm a native of this continually confounding state.

Divorce tax tips: Soon, however, the issue of same-sex divorce and marriage in Texas might not be such a legal mess. Before June ends, the U.S. Supreme Court will decide on the matter of marriage equality.

If the country's nine justices -- or five of them, as is generally the case for this politically and philosophically split court -- determine that same-sex marriage vows are legal in every U.S. jurisdiction, then we also can expect to see more of Kinky's expanded population of miserable couples seeking divorces.

And those folks will learn that divorce, just like marriage, has tax implications. Here are five that should be high on your split list.

1. The children
If you have kids, the parent who gets physical custody for most of the tax year generally gets to claim the youngsters as dependents, as well as various child-related tax breaks. These include the child tax credit, child and dependent care credit and the many tax breaks offered in connection with a kid's education.

Exes can decide to share these tax breaks. So talk with your former spouse, along with your attorney and tax adviser, as to the best way to split these.

Child support, however, is neither taxable nor deductible.

3. The house
Will one spouse get the house you purchased together? If so, that ex-husband or ex-wife needs to be aware of the tax costs of a future sale.

When you sell your primary residence as a post-divorce single owner, the amount of profit that's exempt from capital gains tax is just $250,000 versus the $500,000 that married jointly filing homeowners can exclude.

You might want to sell the property before you split and divide the tax-free proceeds or make accommodations in the settlement to account for possible taxes on a future sale.

4. Other assets
In addition to your home, don’t forget about other holdings and how dividing them will affect your taxes.

Retirement and regular investment accounts are treating differently when it comes to taxes. Money taken out of a Roth is tax-free. Distributions from tax-deferred accounts such as 401(k)s or regular IRAs are taxed at ordinary income rates. And equities are taxed at lower capital gains rates when sold.

So even though you might be splitting assets equally when you look only at the dollar value at the time of your divorce, the taxes due (or not) on the money when it's distributed later could have a major effect on its worth. Pay close attention to the eventual taxes when deciding who gets what part of the portfolio.

5. The calendar
While things as emotional as a divorcee happen when they happen, be aware that the timing of the official end of your marriage will affect, for good or ill, your taxes.

Your filing status, for example, is determined by your marital status on the last day of the year.

If you're still legally married on Dec. 31 and your upcoming split is amicable, you have the option of filing a joint return. Even couples who don't want to be together might find it worth some valuable tax benefits to tough it out a bit longer to use this filing status.

But if you're single on Dec. 31, even if you were legally married the other 364 days, you no longer can file a joint return. Make sure you understand how this status change might affect your taxes and plan accordingly.

Despite my snarky exterior, I'm really a romantic. Hey, I watched The Lake House just last night! So it kind of makes me sad that I find myself once again writing about divorce tax considerations.

But as Kinky notes, not everyone is destined to fulfill their marriage vows. If that's your circumstance, I hope these divorce tax tips mean you have a few less things to worry about during an already difficult time.