You know those heart-tugging salutes to the troops you've seen at various sporting events over the years? The teams didn't feature those moments because of unbridled patriotism and a simple desire to recognize and thank military personnel for their sacrifices.

The Department of Defense paid for those touching moments. 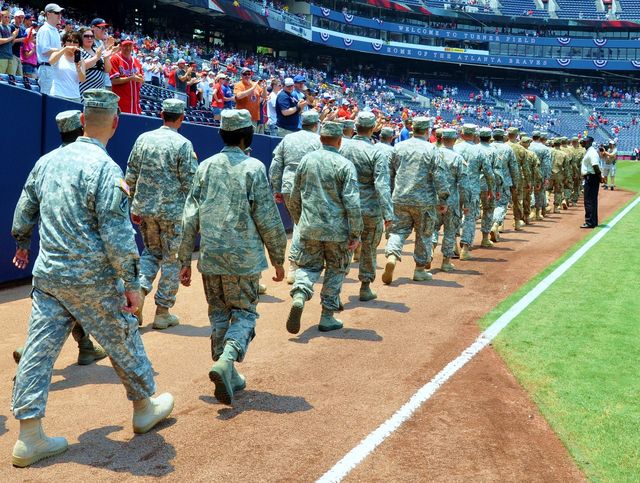 NFL military salutes have prompted official inquiries, but the promotions also have occurred at Major League Baseball Games. These members of the Georgia National Guard participated in a tribute to troops in July 2012 at an Atlanta Braves game at Turner Field. (Photo courtesy Georgia National Guard via Flickr Creative Commons)

Sixteen National Football League teams got more than $6 million for star-spangled ceremonies during the 2011 through 2014 seasons, according to a report by NJ.com based on government contract records.

The bulk of the payments came from the National Guard, with the Army and Air Force also pitching in for on-field programs.

The NFL's Atlanta Falcons were the big winner, getting more than $1 million for the military-themed events. The Miami Dolphins got the least of the $6.103 million total payout, just $20,000. Here's the full breakdown:

The military says the efforts are a useful recruitment tool and worth the money.

"Promoting and increasing the public's understanding and appreciation of military service in the New Jersey Army National Guard increases the propensity for service in our ranks and garners public support for our Hometown Team," according to National Guard spokesman Patrick Daugherty.

Congressional questions: Some folks, however, don't think it looks quite right.

One of those uncomfortable with the patriotic tributes is Sen. Jeff Flake (R-Ariz.). And he's concerned about more than the NFL deals detailed by the New Jersey news service.

Flake wants the Department of Defense and National Guard to explain their "troubling" marketing and promotional relationship with not only professional football, but also with major league baseball, basketball and hockey teams, as well as with NASCAR and college athletics.

Flake sent a letter to the Secretary of Defense and the chief of the National Guard Bureau asking for a full accounting of the amount paid pro leagues and franchises since fiscal year 2009 for salutes honoring members of the Armed Services.

Flake also is unhappy with the perception that the events are gratis tributes by the leagues and/or teams.

"While it may be appropriate for the National Guard or other service branches to spend taxpayer funds on activities directly related to recruiting, giving taxpayer funds to professional sports teams for activities that are portrayed to the public as paying homage to U.S. military personnel would seem inappropriate." Flake wrote. "Such promotions conjure up feelings of patriotism and pride for most sports fans, and the revelation that these are in fact paid arrangements is disappointing."

NJ.com reports that the Senate and House will take such "paid-for patriotism" promotions into account as the chambers consider Defense funding for the coming fiscal year. Similar questions have been raised before.

Good luck with that senator.

Other fun football, tax news: It's been a crazy week for the NFL. In addition to the brouhaha over paid salutes to the troops at games, New Jersey Gov. Chris Christie, a potential candidate for the 2016 Republican presidential nomination, caught flack for spending $82,000 of Garden State taxpayer money on concessions at NFL games.

Hey, his weight-loss attempts notwithstanding, Christie is a big guy and, as late-night comic Conan O'Brien quipped, both those games went into overtime. Plus, I can tell you from personal experience, stadium food is way overpriced.

Then there's Deflategate. As I noted last this week at my other tax blog, there could be tax costs. If Tom Brady's four-game suspension is upheld by NFL Commissioner Roger Goodell, Massachusetts and New York tax departments will lose jock tax revenue.

Also over at Bankrate Taxes Blog this week, I looked at the bequest a wealthy restaurant patron left two New York waitresses. The women got $50,000 each, and that's way better than big tips. While gratuities count as taxable income, the inherited money is tax free.

I usually post my tax thoughts over at Bankrate on Tuesdays and Thursdays. If you miss them there, I provide highlights and links here the following weekend, or earlier if the tax issues involve something important like sports!