It's days like yesterday and today that make me wonder why we all look so forward to spring here in the United States.

While the warmth is welcome after winter's persistent chill, spring also too often brings disasters.

Tornadoes tore through the middle section of the country yesterday. Some reports say as many as 50 twisters were sighted. 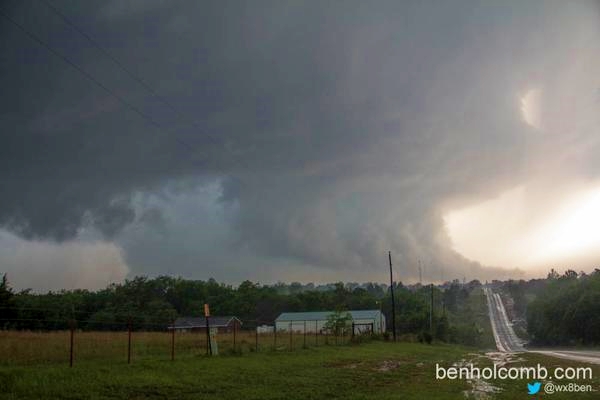 This wedge tornado and mesocyclone (storm-scale region of rotation) with inflow cloud was spotted west of Newcastle, Oklahoma, on May 6, 2015, by storm chaser Ben Holcomb, aka @wx8ben on Twitter.

Property damage was heavy in Oklahoma, where one person also drowned in the accompanying downpours, and a dozen injuries, two critical, were reported.

Seasonal weather threats: This happens every May, or earlier as folks in Tulsa can attest.

Sometimes it's "just" a twister or two a day or week. Other times, it's like the current weather pattern that spawned yesterday's storms and which might bring more of the same today, or the massive, and deadly, tornado outbreak of 1999.

The inland areas of America, however, aren't the only places under possible threat from destructive storms.

Folks who live along the Atlantic and Gulf Coasts are getting ready for hurricane season. It officially begins June 1. But sometimes, an angry Mother Nature decides she wants to visit the beaches sooner.

90L is very slow, both in developing and moving in the Atlantic. If it gets its act more together, it will become Ana.

UPDATE, Friday, May 8, 2015: It's official. Subtropical Storm Ana is churning off the southeastern Atlantic seaboard.

But even without attaining named status, weather watchers say the system likely will cause some onshore weather problems. Meteorologists expect the system to become at least a subtropical depression.

Outer fringes of the system are expected to be felt along the Carolina coasts by Friday, May 7. Georgia beaches and parts of north Florida also may see some of the storm's effects, which are forecast to hang around through the weekend.

Sorry for your washed out early beach outing.

Long-term hurricane outlook: It's exceptionally early in the season for such a system, say weather watchers. Since 1950, only eight subtropical depressions or storms have formed before May 7.

So does 90L/Ana then mean that we're in for an active hurricane season?

Not necessarily. According to the Weather Channel, since 1851, 62 percent of early starts to a hurricane season have ended at or below average in the number of storms.

The Tropical Meteorology Project of the Department of Atmospheric Science at Colorado State University in Fort Collins, Colorado, -- yeah, hurricane forecasts from the Rocky Mountains; go figure -- predicts that we'll see seven named storms in 2015. Three of those will become hurricanes, with just one major 'cane.

That's already a light storm season, so if the appearance of Ana means 2015 storms are even fewer and less severe, then good for all my friends who live in the usually storm-prone areas. Although truth be told, all of us here in drought-stricken Texas wouldn't mind a tropical soaker to move over our state this summer.

Get ready NOW! What is certain from this week's bad weather is that it's time to get ready, regardless of where you live and what type of potentially destructive weather is common for your region.

You need to make physical as well as financial preparations for any potential natural disaster.

As long-time readers of the ol' blog know, I'm as big a weather geek as I am a tax geek. I've combined these two fixations on a special Storm Warnings page.

There you'll find a collection of posts on preparing for, dealing with and recovering from Mother Nature's catastrophes. Tax help to recover from disasters naturally is part of the mix, as is donating possibly tax-deductible gifts to help those who sustain storm damage.

Take a look at the resources and put together your disaster kit today.

As for all the posts about recovering and rebuilding, I hope you don't have to avail yourself to that information. But just in case….

And most importantly, stay safe, everyone!