Fun times here in Texas. Our lawmakers are still fighting over changes to the state's tax structure.

Since there's no state income tax, the Lone Star State House and Senate have been bickering for weeks over property vs. sales tax cuts, with some business tax discussions thrown in just for fun.

The debate, although done with a drawl, is no different than many going on in state houses across the country.

Nationwide, around 75 percent of local tax revenue comes from real estate taxes, according to a Tax Policy Center report analyzing real estate levies from 1977 through 2012.

But state legislators tend stir the property tax pot by routinely looking for ways to ease the levies by applying caps, subsidies, exemptions or changes in the balance between commercial and residential tax rates.

Do you know exactly how your state gets money to operate? Governing magazine has put together a cool interactive table that shows how much of common tax types each state collects. 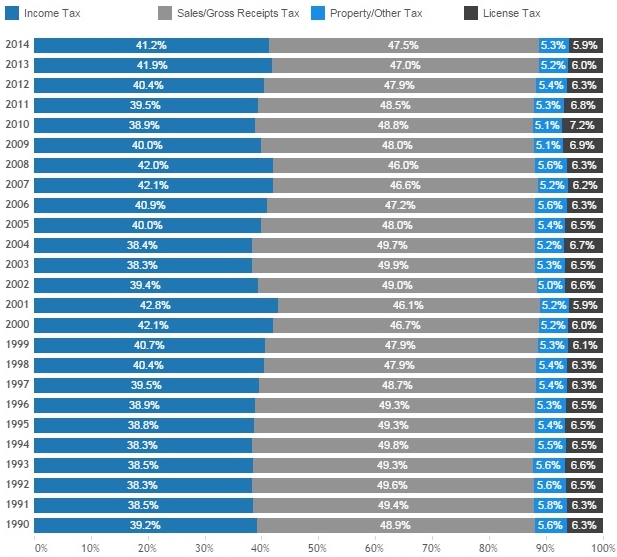 As this national overview shows, the ratios of tax collection have been pretty consistent over the last 25 years. Now, however, some states are looking to adjust their tax collection percentages.

The generally conservative argument is that slashing or eliminating income and business taxes will spur economic activity. That, they say, will benefit everyone.

Liberals, however, tend to argue that more regressive tax systems, such as sales taxes or flat income taxes, are unfair to lower-income earners. Those tax systems, they say, eat up more of lower-earners cash.

Still, the appeal of income tax cuts is undeniable, especially on a political level.

Many state leaders (most recently in Maine) want to go further than just reducing their income taxes. They want to join Alaska, Florida, Nevada, South Dakota, Texas, Washington and Wyoming in having no tax at all on wage income. (New Hampshire and Tennessee tax only dividend and interest income.)

Robbing Peter to pay Paul's taxes: Is that possible in a state that has for years depended on income tax revenue? Yes, if its citizens are willing to accept replacement taxes and/or dramatically reduced services.

In seeking an answer to the income tax cut/elimination question, politicians and tax experts are still closely following Kansas.

The Sunflower State slashed taxes in 2012 and 2013 under a Republican legislature and GOP Gov. Sam Brownback and is facing a $400 million budget gap. Now the state is considering slowing down the income tax reductions and hiking alcohol and tobacco taxes.

Will it be enough? I doubt it.

But opposition to other tax increases remains firm, despite the costly effects. And sometimes you simply have to let people have what they think they want in order for them to see that it's not exactly what they thought it was. In Kansas' case, you have to let them have it twice, since voters there re-elected tax-cut architect Brownback last fall.

Texas tax trade-off: Personally, I wish Texas would institute a progressive state income tax. We have lots of wealthy folks in the Lone Star State and right now they're making out really well why lots of poorer folks are looking at cuts to services they need because the state doesn't have the money to fund them.

The hubby and I are not wealthy, but we make decent livings, so we'd pay those income taxes. We've done so before when we lived in both the District of Columbia and then Maryland.

I'd happily trade some cuts in property taxes, which would be possible if the state had more money to pass along to local jurisdictions such as school districts, for an income tax.

However, I am in the vast minority here in the Lone Star State. No income tax is right up there with free parking as the big financial issues for Texans.

There's also a general distrust here in Texas of government <cough>Jade Helm<cough>, even of state and more local governments. Texans fear that if an income tax were implemented, lawmakers wouldn't make up for it by cutting other taxes; the state would just start collecting the added income tax.

I must admit, after watching the Texas legislature and local entities operate for the last 10 years, I can see some value in this argument.

So my neighbors and I wait to see what kind of tax deal our legislators can cobble together this session. Again given what I've seen over the last decade, I expect that it will not make any substantial difference to our tax bills. It will, however, provide much material for continued demagogic political posturing.

What's going on tax-wise in your statehouse? Are your lawmakers talking about drastic tax changes to your revenue system? Do you agree with the proposals? Or do you think your state legislators are being unrealistic or worse, simply pandering for future votes?