I count my blessings every single day. It takes a while because the list of things to be thankful for is long.

One item on my good life inventory is that the hubby and I, aside from our mortgage, are debt free. Part of the reason for our relative financial freedom is planning and discipline.

But I must admit another factor is sheer luck.

Both the hubby and I grew up in a time when college costs, at least at public, state-supported schools, weren't out of control. 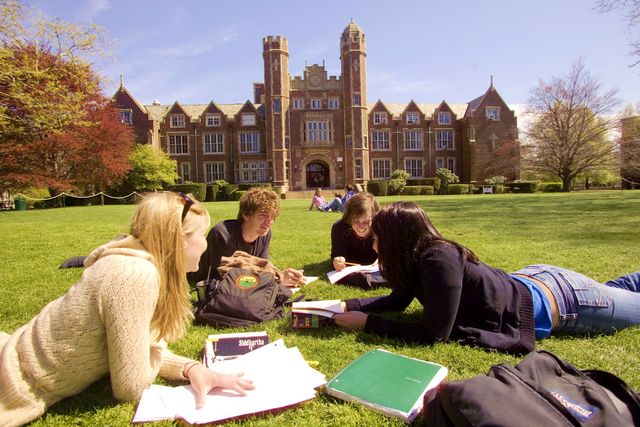 The joys of al fresco learning via On Campus Market/OCM.com blog

Our parents, of course, paid a large portion of our university costs, but we also were able to pitch in with a scholarship here and there and working summers to pay for our upcoming semesters.

Skyrocketing college costs: That's not an option for most college kids and their families nowadays. College costs keep going up, a lot.

From 2009-2010 to 2014-2015, tuition and fees for in-state students at public four-year colleges nationwide shot up 10 percent, according to the latest data collected by the College Board.

Students seeking advanced degrees during those time frames got even worse cost news. Tuition and fees rose by 16 percent at public master's universities and by 17 percent beyond inflation at public doctoral universities.

In current dollars for full-time in-state students, that comes to average tuition and fee prices of $7,142 at bachelor-degree public colleges, $7,968 at master's universities and $10,075 at doctoral universities.

It's no wonder that many if not most of today's students and their families are taking out loans or looking for education tax breaks.

But those higher education financing options recently have run into their own set of problems.

Really long-term school loans: Let's look first at loans. While some of the interest on the college debt is tax deductible, it really doesn't make up for the length of time some of these loans last.

In fact, more senior citizens are carrying college debt into retirement, either from loans they took out to pay for graduate or work-related continuing education courses or from loans obtained to pay for their children's or other dependents' higher education.

Some seniors are even losing part of their Social Security payments to the unpaid college debts.

Tax credit trouble, too: So it's no surprise that college students turn to tax credits to help cover their growing education costs. But a just-released Treasury Inspector General for Tax Administration (TIGTA) audit finds that these options are very costly to the U.S. Treasury.

The Internal Revenue Service issued $5.6 billion in erroneous education tax credits, primarily the American Opportunity Tax Credit (which is a temporary replacement of the Hope Credit through 2017) and the Lifetime Learning Credit, in connection with claims on 3.6 million returns filed for the 2012 tax year, says TIGTA.

Around $2.5 billion of the wrongly issued credits were refundable, meaning the money went to taxpayers even if they owed no tax bill. The remaining $3.1 billion in erroneous credits were nonrefundable.

Previous problems not solved: TIGTA looked into the tax credits as a follow-up to previous investigations that revealed problems with education credits.

Back then, the IRS watchdog recommended several moves to the IRS that could help reduce the erroneous education claims. TIGTA wanted to see whether the IRS had made progress in detecting and preventing questionable education credit claims.

The answer TIGTA got is not encouraging.

"The IRS still does not have effective processes to identify erroneous claims for education credits," said J. Russell George, the Treasury Inspector General for Tax Administration. "Although the IRS has taken steps to address some of our recommendations, many of the deficiencies [the inspector general] previously identified still exist. As a result, taxpayers continue to receive billions of dollars in potentially erroneous education credits."

The IRS, however, says it has taken a number of steps to ensure that the education tax credits are administered properly. Specifically, the agency noted in a statement in response to the TIGTA report, changes made in 2012 to a key form reduced the number of claims by $4.5 billion in one year.

Credit complexity: But, notes the IRS, its efforts are hampered by the complexity of the tax credit laws.

"Congress could help by approving legislative proposals that would give the IRS new tools to access other government databases to validate student eligibility and help disallow the credits more easily," says the IRS, as well as by simplifying educational tax credits.

The House and Senate already have shown an interest in consolidating and simplifying the various education tax breaks. Perhaps this TIGTA report and the IRS' own acknowledgement of the problems they, as well as taxpayers, face will finally be what it takes to get the array of educational tax breaks to a more manageable level.