Despite the massive crazy that can be Texas -- we do like to do everything, good or bad, big! -- one thing I do love about the Lone Star State is its far-reaching history.

Everyone knows that Texas once was an independent country. Texans like to make that clear to anyone who'll listen, and even those who've quit paying attention, all the time. But before that, we Texicans were part of Mexico.

So it's no surprise that we latch onto that Mexican heritage on special days, such as Cinco de Mayo. 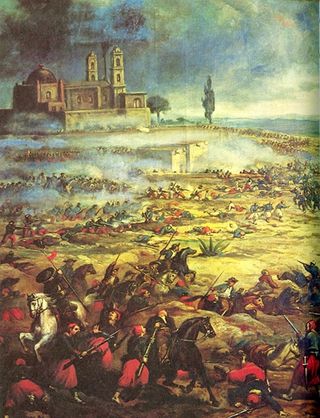 Of course, May 5 is a minor holiday in Mexico, except in the state of Puebla. That's where, on May 5, 1862, Mexican forces resoundingly defeated the invading French.

It's also a big deal here in Texas, and not just because we'll jump at almost any chance to celebrate with margaritas (and beer!). It's because the victorious Cinco de Mayo Mexican army was led by Texas native Ignacio Zaragoza Seguín.

The military leader was born on March 24, 1829, at Bahía del Espíritu Santo in the state of Coahuila and Texas, near present-day Goliad, Texas.

And although the French captured Mexico City the summer following the Puebla victory, the delay thanks to Zaragoza's troops 153 years ago is believed to have shortened the French intervention in Mexico and changed its outcome.

That outcome also means that here in Texas, we say si instead of oui.

Hispanic small business growth: Mexico's influence today, in both Texas and nationwide, can be seen in the growing Hispanic population and the increasing numbers of companies owned and operated by folks with ancestors from south of the Rio Grande.

So it's fitting that a celebration of part of that heritage coincides with Small Business Week. The Small Business Administration annually recognizes these important enterprises, and in 2015 is holding special events in five cities, which just so happen to have large Hispanic populations.

U.S. Census Bureau data, albeit a bit dated as it is awaiting collection of 2012 information, show that in 2007 there were 2.3 million Hispanic-owned businesses across the country. That's up 43.6 percent from 2002. Look for it to make a similarly large increase when newer numbers are tallied.

As for the dollars connected to these businesses, Census data says $350.7 billion was generated by Hispanic-owned businesses in 2007, up 58.0 percent from 2002. Again, this amount should grow as other studies, such as an April report from Pew Research Center, show that America is steadily, and rapidly, becoming more diverse.

Here in Central Texas, more recent statistics show that Hispanic-owned business is booming. These local companies saw their total revenue numbers increase 90 percent from 2007-2013, according to research by the Greater Austin Hispanic Chamber of Commerce and reported in the Austin Business Journal.

By 2020, some 51,000 Hispanic-owned businesses are expected to be in operation and contributing a total of $12.8 billion to the local economy, according to the Hispanic Chamber's report.

Cinco business tax tips: These business owners look to be doing OK, but everyone can use a tax refresher. So in honor of Small Business Week and Cinco de Mayo, here are five quick business tips for all business owners.

1. Keep track of expenses
The Internal Revenue Service is all about the numbers, and it looks long and hard at companies, especially smaller ones that might not have a lot of automatic third-party tax documentation. So provide that info to the IRS yourself to prove that you're entitled to those business expense deductions. You can do so when you set up a good record keeping system and follow it contemporaneously. It's much easier for you to set aside a few minutes every business day to review your receipts and record them than trying to recreate the costs if the IRS asks months (or years) later.

2. Claim your home office
If you're a very small business and work from home, a key part of those daily expenses are the ones related to your home office. While some folks shy away from claiming a home office because they fear it's an automatic audit red flag, it can provide a great tax break, especially if you're operating on a thin margin. So consider claiming your office. Just make sure you follow the rules and, again, can prove its necessity to your business operation.

3. Manage inventory and assets
I'm not in a business where I have to worry about inventory, but a lot of businesses are. As Alex Price notes in an article for Business2Community.com, assets and inventory can have a significant impact on your company's tax liability. Using an effective inventory management system, often including an asset management software system, companies can easily prepare your inventory for end of year taxes and any potential audits, says Price.

4. Consider your company's structure
Many small companies start out as solopreneurships and file Schedule C as part of the owner's individual federal income tax return. That's a fine status. But is one you want to keep now that you've grown?

Entrepreneurs can choose to structure their businesses as C corporations, S corporations or limited liability companies. Each has an effect on the business' and owners' taxes.

"Sometimes, individuals will incorporate their business online and think they're OK because they received an LLC from Legal Zoom, but the website doesn't provide advice on the kind of structure that's appropriate for a particular customer," Ryan A. Brown of the Arlington Law Group told Law360.

The word that jumps out to me in Brown's comment is advice. Talk with a tax professional who specializes in small business needs before making an entity move that will affect your taxes.

5. Save for retirement
I know, I'm right there with you. You need as much money as you can make to keep your company afloat. But as soon as you get some cushion, put some cash into a self-employed retirement plan. Not only will you need that money when you're done running your business, it can provide an immediate tax deduction.

Now that you've taken some time to consider your business' tax needs, it's time for some Cinco de Mayo celebrating. And remember, if you take out some clients for margaritas, Dos XX and queso and follow the tax code rules, part of today's expenses could be deductible!

I do small business consulting in Nashville. I have not had the pleasure of doing business with any Hispanics yet... I know their culture is sometimes more family oriented than the culture I am accustomed to. Is there any benefit to trying to learn Spanish, so that I can attract their business? Or would it be difficult since Hispanics tend to be more tightly knitted as an ethnicity, which would cause many of the business owners to go in the route of a family friend accountant? Also, I am in Nashville, TN. We have a pretty diverse city, but we of course have nowhere near the Hispanic population that Texas towns do...