Home Table of Contents Tax Tips Credits Deductions Refunds State Taxes Politics/Laws Tax Terms Archives
May 2: A big day for sports gamblers & those taking their bets
Uncle Sam, however, once again will come up short on gambling taxes
May the tax force be with you
Also known as May Tax Moves to make

The school year is winding down across most of the United States, but by the time classes resume in the fall, students and their parents could have some added help in paying for college costs. 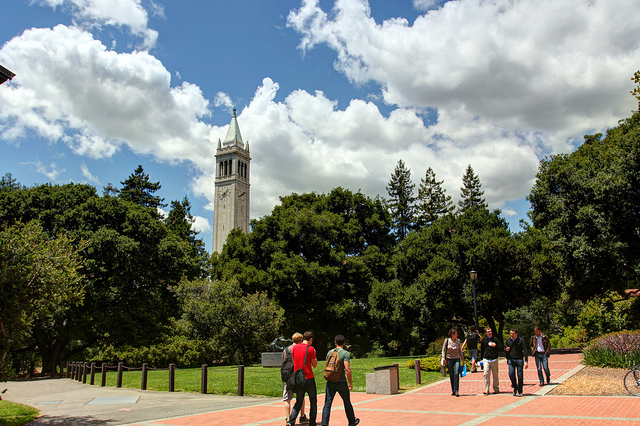 Students at the University of California at Berkeley, courtesy John Morgan via Flickr Creative Commons.

On April 26, the Senate Finance Committee unanimously approved S. 335, a bill that would expand the popular 529 savings plans.

The accounts, named after the section of the tax code authorizing them, allow families to save money that grows tax-free. The money can be withdrawn, again with no tax consequence, to pay for some higher education expenses.

If the full Senate goes along with the Finance Committee's recommendation, qualifying 529 plan expenses would include computers. Currently, that technology, although a requirement in some schools and definitely an advantage in all, is not 529 eligible.

Students who have to drop out of school after paying with the tax-favored education funds also would be able to avoid a tax penalty if they redeposited the school-refunded money into a 529 plan within 60 days.

529 plan changes on the way: As I noted last week in my other tax blog, the Senate bill is identical to the House college savings measure, H.R. 529 (gotta love the symbolism), that overwhelmingly passed that chamber in February.

The Senate Finance Committee's OK of the bill, however, was not automatic. In fact, Sen. Ron Wyden of Oregon, ranking Democrat on the panel, argued that the Senate tax-writing committee wasn't a rubber-stamp for tax proposals passed by the House.

The Senate measure, introduced by former Finance Chairman Charles Grassley (R-Iowa), is "useful, but very narrowly targeted," said Wyden in his statement before the panel began marking up the bill.

"The bill the Finance Committee is considering today could help many families wring a little more value out of their 529 savings plans, and that would be a valuable accomplishment for them," Wyden added. "But I hope the committee can come together on a bipartisan basis to strengthen this legislation and then do even more, particularly for those who most need help."

Wyden and his Democratic colleagues on the Finance panel had 29 amendments they had hoped to attach to the bill. In the end, however, Grassley's original bill was cleared by a 26-0 vote.

It's not clear when the full Senate will consider the bill, but when that does happen it's expected to also be handily approved. The Republican-controlled Senate, like the GOP-heavy House, sees 529 plan enhancements as a jab at President Obama.

In fact, it was a White House proposal to scale back 529 plans that ignited the pro-plan move in the House. Since his idea was met with such opposition, including from some in his own party, Obama has since said he would support the expansion of 529 plans.

Continuing college payment problems: The 529 plan changes are expected to add $51 million to the federal budget deficit over the next decade, according to an analysis by the nonpartisan Joint Committee on Taxation.

That added government debt, however, didn't faze members of Congress who supported the House and Senate bills.

And Uncle Sam's balance issues definitely are not a concern of parents and students. They have their own debts to worry about.

A new American Institute of Certified Public Accountants survey found that 68 percent of adults with college loans or whose children have loans said they regret how they financed their own or their children's education.

Popular do-over options included attending a less expensive college (54 percent) and going to a trade school for a specific profession (43 percent). More than a quarter (27 percent) would have delayed starting college in order to build up savings and reduce the amount of student loans needed.

Compounding the actual dollar concerns of college debt is the feeling of hopelessness that accompanies many of the loans.

It’s obvious that too many families know too little about student loan debt, writes Ron Lieber this weekend's Your Money column in the New York Times.

Lieber asked readers to share their own stories and offer the most important thing they wish they had known before they borrowed money for college and began to repay it. "The comments painted a troubling picture of clueless teenagers, frazzled parents and college administrators who may not always take students by the shoulders and question their debt levels," Lieber wrote.

Do you or your children have student debt? How much of a burden is it? Would 529 plan enhancements help? Or do you think Congress should make other changes to help students and their families deal with the costs of higher education?

Maine's income tax proposal: Also at Bankrate Taxes Blog last week, I looked at whether Maine will do away with its income tax.

That's the suggesting of its governor, but the state legislature is less enthusiastic about wiping out a major state revenue source.

My Bankrate tax musings usually are posted on Tuesdays and Thursdays. If you miss them there, I try to follow up here at the ol' blog each weekend with highlights and links.