Are we tax sheep? A U.K. collection effort says 'yes'

Do you do things because other people do? You know, the kind of actions that always prompted my mom to ask, "If everyone jumped off a cliff, would you, too?" 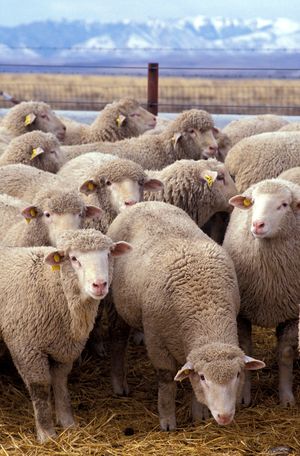 Sorry, Mom, but apparently that is what we do. We are sheep.

Or at least that's what a sizable chunk of United Kingdom taxpayers did when it came to paying Her Majesty.

When the British government saw that a lot of folks weren't paying their taxes on time, it turned to behavioral experts for help.

These psychologists, anthropologists and other observers of human nature suggested that a couple of lines be added to tax collection letters:

"The great majority of people in your local area pay their tax on time. Most people with a debt like yours have paid it by now."

On-time payments to Her Majesty's Revenue & Customs (HMRC), the United Kingdom's version of our Internal Revenue Service, rose by more than 15 percent.

That's enough of an increase to earn this week's By the Numbers honor.

Human nature to follow: Despite those taxpayers' chagrined mums, who no doubt are sadly shaking their heads about unpaid taxes as well as their easily led children, sometimes it's not so bad to be a follower.

Plus, we just can't help it.

"We're wired to behave as others do," Elspeth Kirkman, a director at Behavioral Insights Team, the group behind the U.K. project, told CNN Money. "On a primitive level, maybe if you didn't do what the others did you got eaten by the sabre tooth."

The added-text tax collection effort is now being applied across all of Great Britain. If it goes as expected, on-time HMRC payments are estimated to increase by $240 million.

Examining actions in the U.S.: Kirkman and her colleagues are coming to the United States as part of What Works Cities, a $42 million project funded by Bloomberg Philanthropies to help cities more effectively use data.

If you're worried it's all a little too much in the realm of mind control, don't.

"It's about retaining people's ability to make a free choice," says Kirkman. "But helping them not make a terrible one."