Here in Texas, especially the western part of the state where I grew up and communities are many miles apart, you get used to driving. So when roads start deteriorating, motorists tend to get irritated.

The rage over road conditions hit a new high when some of Texas' paved roads were left to return to gravel before the citizenry voted last November to direct some of the state's reserve "rainy day" money to transportation projects.

On a more local level, counties and cities still appropriate some funds for relatively rocky roads. My particular subdivision street, for example, is one of a handful in our neighborhood that Travis County and Austin officials decided needed some touching up. 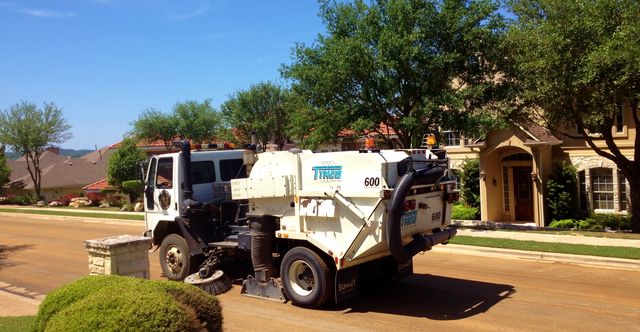 This street sweeper spent much of this morning driving over (and over and over and over) our street to clear the sand that was final component in the road's resurfacing last week.

Road work, or lack thereof, frustrations, however, are not limited to the Lone Star State.

Road tax vote: Residents of Michigan, the state that is home to major auto manufacturers and Detroit, aka the Motor City, have been dealing with the annoying reality of dwindling roadway funds for months.

They finally will get a say next month on a way to raise potentially millions of dollars for the state's transportation needs.

Proposal 1 will be on the May 5 ballot. If approved, it will, among other things, hike the state's sales and use tax by 1 percent, from 6 percent to 7 percent. The increase is estimated to put an additional $1.2 billion a year into fixing the state's deteriorating roads and bridges.

Currently, Michigan's funding for road work comes primarily from fuel taxes and vehicle registration fees. This basically makes road maintenance revenue a user fee. The sales tax hike would spread out the cost to all who pay the state's sales and use taxes.

The ballot proposition also would also raise, as part of a legislative compromise that created the ballot measure, an added estimated $600 million a year for public transportation, education, local governments, and other services.

Because of the ballot measure's title and the percentage increase of the sales tax hike, 1 is this week's By the Numbers figure.

Voters not sold, yet: But despite Michigan drivers' growing dissatisfaction over the state of the state's infrastructure, the tax increase isn't a sure thing. Tax hikes, even for projects that residents support, tend to be touch to sell when voters get a direct say.

That was the case last August in Missouri, where voters defeated a three-quarters cent sales tax for transportation. Two months later, Massachusetts voters repealed a provision that would have tied future state gas tax increases automatically to inflation.

The Michigan measure seems to facing a similar fate.

Although the pro-Proposal 1 side has raised almost $9 million to make its case for the tax increase, compared to around $211,000 for opponents, the measure is not doing well in public opinion polls.

Of course, the only polls that matters are those where ballots are cast.

And the fate of Michigan's roads could depend on how many voters make their ways, by whatever transportation methods, to vote on May 5.

Somebody needs to standup for Michigan