Lois Lerner, the former head of the Internal Revenue Service's Exempt Organizations Division and the GOP focal point in the tax agency's Tea Party tax-exempt debacle, is off the hook for her refusal to testify before Congress.

Before her resignation from the IRS in September 2013, Lerner headed the agency's tax exempt unit when the 501(c)(4) application scandal broke.

Lerner twice invoked her Fifth Amendment right against self-incrimination in refusing to answer questions from the House Oversight and Government Reform Committee. Members of that and other Congressional committees wanted her to talk about her role in the handling of applications from certain groups that appeared to be politically affiliated.

Her refusal to comply subsequently led to the full House voting on May 7, 2014, to hold Lerner in contempt of Congress. 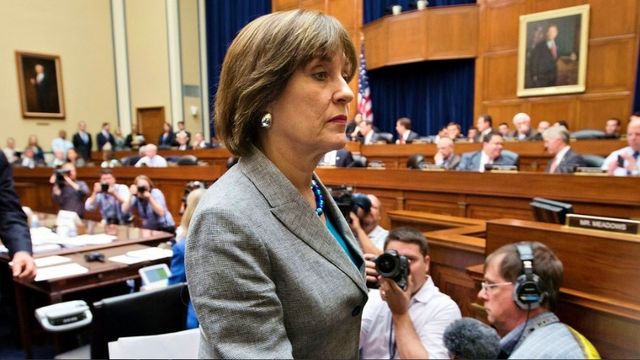 Lois Lerner, before retiring from the Internal Revenue Service, leaves a Capitol Hill hearing on agency procedure for tax-exempt status requests. She refused to testify at House Oversight Committee hearings in May 2013 and March 2014.

The Department of Justice (DoJ), however, has decided not to take the action any further.

In a seven-page letter to House Speaker John Boehner, R-Ohio, dated yesterday and released today, U.S. Attorney Ronald Machen said that Justice has decided "not to bring the Congressional contempt citation before a grand jury or take any other action to prosecute Ms. Lerner for her refusal to testify."

Machen, who stepped down as U.S. attorney on Wednesday, making his letter to Boehner one of his final DoJ acts, said in the letter that after receiving the House citation, the matter was turned over to "a team of experienced career prosecutors in this United States Attorney's Office."

After extensive analysis of the "facts of this matter and the applicable law," writes Machen, that team concluded that the House Government Oversight committee was correct in one area. The committee "followed proper procedures in notifying Ms. Lerner that it had rejected her claim of privilege and gave her an adequate opportunity to answer the Committee's questions." That did make Lerner's refusal to answer "willful."

However, Machen noted that the DoJ team also concluded that Lerner did not waive her Fifth Amendment privilege by making an opening statement on May 22,2013, because she made only general claims of innocence.

"Thus, the Fifth Amendment to the Constitution would provide Ms. Lerner with an absolute defense should she be prosecuted…for her refusal to testify," writes Machen.

Not a surprise: The GOP request that the Justice Department to take further action always was a long shot.

Truth be told, it was all a political show and the Republicans got what they wanted then and now, a chance to grandstand and make points with their core constituents.

Expect a series of denouncements of DoJ's inaction along the lines of that issued in a statement by Ways and Means Oversight Subcommittee Chairman Peter Roskam, R-Ill.:

"Today's announcement surprises no one. It has long been clear that this administration has no interest in providing accountability for the innocent Americans who had their civil liberties violated by the IRS. This is why the House also called on the attorney general to appoint an independent special counsel to investigate this targeting. Justice's decision not to prosecute Mrs. Lerner for her refusal to engage with Congress in no way clears her of wrongdoing. The evidence thus far indicates that Mrs. Lerner pursued an inappropriate and abusive agenda against American citizens using the power and authority of the IRS to target those with whom she disagreed. We will continue to investigate all of the facts, hold her accountable for any criminal wrongdoing to which she was a party, and make commonsense reforms at the IRS to restore trust and ensure that there is no Lois Lerner 2.0."

While the Congressional component of the Lerner case now is effectively over, the former IRS employee still could take a hit if an ongoing FBI investigation into whether the IRS broke any laws in its handling of Tea Party groups' tax-exempt status applications. Lerner's lawyers says she cooperated with the FBI, which is expected to release its findings soon.

One less IRS issue: Meanwhile, it's looking like the IRS commissioner was wise to ignore Lerner in his speech yesterday before the National Press Club. He told the Washington, D.C., audience that the agency has put its many problems to rest.

It's unclear whether the commission knew about the DoJ decision. Maybe. Maybe not.

Regardless, the commish looks particularly prescient now that another federal agency has cleared, or at least cut loose, the person on this charge who was most involved in one of the IRS' most troubling matters.