The next time you're in Sin City, take a break from the casinos to check out The Mob Museum's "Follow the Money" exhibit.

The display opened April 17 and is a permanent part of the downtown Las Vegas museum. It spotlights the work of legendary agents in the Internal Revenue Service's Criminal Investigation Unit.

You know the ones, the Treasury Men or T-Men who palled around with Elliot Ness. They were key in taking down mobsters such as Al Capone, who eventually was convicted and sent to jail not for alleged murders and other violent crimes, but on tax charges and sentenced to prison thanks to the efforts of IRS investigators. 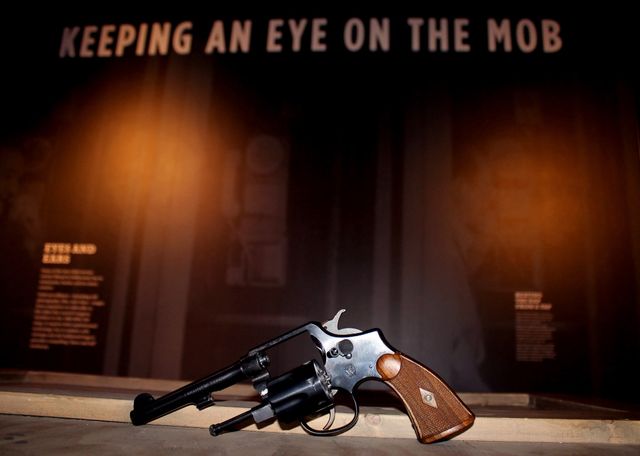 This Smith & Wesson .38 Special, owned by an IRS agent who infiltrated Scarface's gang, is one of the artifacts on display in the Ernst & Young-sponsored exhibit "Follow the Money." Photo courtesy The Mob Museum.

Undercover weapon: One of the exhibit's highlight is the .38-caliber handgun that belonged to IRS investigator Michael Malone, the man who went undercover in Capone organization in the 1930s. The gun's serial number has been drilled out, suggesting it was used as part of Malone’s clandestine involvement in criminal organizations.

Before making it to the Silver State repository of criminal lore, Malone's gun was stored for decades in attics, closets and a bank safe-deposit box in New Jersey. Malone's family members say the gun was found under his pillow after he died.

"Michael Malone was, I believe, the greatest undercover agent in the history of law enforcement," said Paul Camacho, a former head of IRS criminal investigations in Las Vegas and member of The Mob Museum Board of Directors, in announcing the new show. "This was the riskiest assignment you could ever think of. People were dying left and right, witnesses were dying left and right. Nobody wanted to be with these guys."

Today's T-Men: Treasury and IRS criminal investigators are continuing the tradition of putting away financial crooks. Nowadays, however, instead of the Tommy guns of yore, outlaws are utilizing more modern methods, aka illicit online activities, and doing so on an international scale.

And in 2014, the IRS Criminal Investigation (CI) Unit, the only federal law enforcement agency with jurisdiction over federal tax crimes, did is job well. 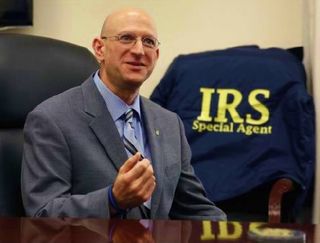 CI is routinely called upon by prosecutors across the country to be the lead financial investigative agency on a wide variety of financial crimes, notes CI Chief Richard Weber (pictured at left).

In the largest criminal tax case ever filed, Credit Suisse pleaded guilty to conspiracy to aid and assist U.S. taxpayers in filing false income tax returns and agreed to pay a total of $2.6 billion.

Following the Credit Suisse investigation, IRS CI led the case against Bank Leumi Group, a major Israeli international bank that admitted conspiring to aid and assist U.S. taxpayers to prepare and present false tax returns. This unprecedented agreement marks the first time an Israeli bank has admitted to such criminal conduct. Bank Leumi Group will pay the U.S. a total of $270 million and cease to provide banking and investment services for all accounts held or beneficially owned by U.S. taxpayers.

And BNP Paribas was the largest prosecution ever brought against a financial institution and one of the most significant criminal prosecutions of sanction evasion in U.S. history.

"The budget challenges facing our agency are nothing new. In the past five years, CI's staff has been reduced approximately 11 percent bringing staffing to 1970s levels. This trend cannot continue," says Weber.

But despite the lack of operating funds, Weber says his criminal investigators "will continue to remain focused on finding and investigating great cases that make a real difference in compliance of our nation's tax laws."