Today is the day this year when the nation as a whole has earned enough money to pay its total 2015 tax bill, according to data analysts at the Tax Foundation.

Economists at the Washington, D.C., think tank have been calculating Tax Freedom Day since 1990. They use federal budget projections, data from the U.S. Census and the Bureau of Economic Analysis, and projections of state and local taxes. 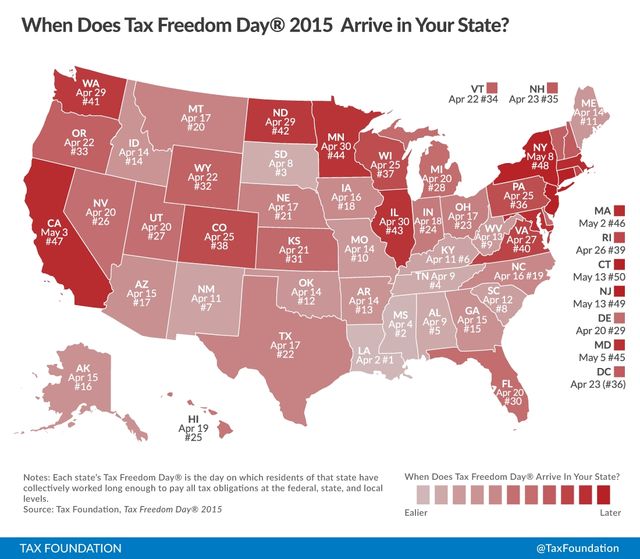 The remaining seven days are spent paying estate and inheritance taxes, customs duties, and other taxes.

State taxes, too: In addition to the national Tax Freedom Day, the Tax Foundation also examines the tax freedom days for the states and the District of Columbia.

The total tax burdens of the 50 states (and Washington, D.C.) vary considerably due to the differing state tax policies and the progressive nature of our federal tax system.

The combination of higher-income and higher state taxes mean, says the Tax Foundation, that some folks celebrate their local Tax Freedom Day later than today.

Residents of Connecticut and New Jersey have to wait the longest, until May 13, to celebrate their State Tax Freedom Days. New York's is May 8.

At the other end of the Tax Day calendar we have Louisiana, where residents bear the lowest average tax burden in 2015. That means Tax Freedom Day arrived for the Pelican State folks on April 2. Also celebrating earlier were Mississippi (April 4) and South Dakota (April 8).

Not everyone is partying: Some folks, however, aren't celebrating Tax Freedom Day.

The Center on Budget and Policy Priorities (CBPP), a liberal policy organization also in the national capital, says the Tax Freedom Day report "can leave a strikingly misleading impression of tax burdens."

"In reality, taxes pay for services that benefit us every day and are central to our idea of freedom," says CBPP. "Few Americans would likely feel more 'free' if Tax Freedom Day came earlier in the year because the federal government stopped providing for national security, ensuring homeland security, conducting food safety inspections, or testing prescription drugs."

I agree with CBPP and Supreme Court Justice Oliver Wendell Holmes. Taxes are indeed the price we pay, most of us more willingly than not, to live in a civilized society.

But I, too, can enjoy the various calculations that offer other perspectives on the taxes that make every day we share in our society more worthwhile.