IRS telephone tax help was a dismal 38.5% this filing season

The IRS commissioner wasn't kidding. Weeks before the 2015 tax filing season started, John Koskinen warned both his employees and the taxpaying public that many calls for help were likely to be ignored.

"For the upcoming filing season, we estimate that only about 50 percent of taxpayers who call can reach us over the phone," Koskinen said in an email to Internal Revenue Service staff back in December.

Turns out he was being optimistic.

Telephone tax help troubles: A new Treasury Inspector General for Tax Administration, or TIGTA, examination of the interim results of the 2015 filing season found that the number of calls in the IRS' toll-free assistance queue that were answered during this just completed tax-filing period was only 38.5 percent.

A lot of taxpayers probably felt like they would have had as much success with a can and string as they did with their telephones in trying to get help through the IRS hotline during the just-finished filing season.

That's an almost 52 percent drop in the number of phone calls answered this year compared to 2014, when 74.7 percent of callers with tax questions got through.

Maybe this decrease was what Koskinen was predicting when he came up with his 50 percent figure.

Terrible new telephone trend? Perhaps even more distressing than the dramatic drop in telephone assistance is that it also represents a reversal of a more helpful trend.

From 2012 through 2014, the IRS has been improving its telephone help efforts. The number of calls answered had increased each year, while callers' wait time had dropped. 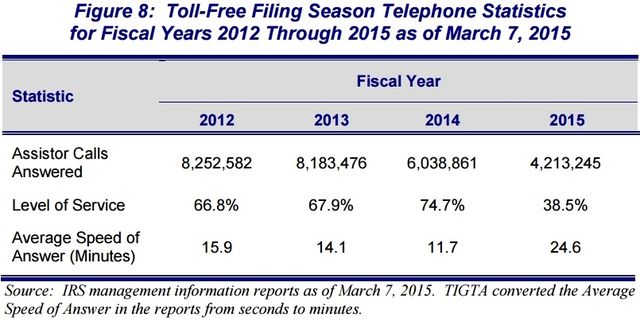 But the connection definitely was dropped in 2015.

TIGTA found that during fiscal year 2015, the IRS plans to assist 5.3 million filers at its Taxpayer Assistance Centers. That's a nearly 4 percent decrease from the previous fiscal year.

Instead, says TIGTA, continued budget cuts mean that the tax agency is depending more on technology.

Operations oversight hearing: The TIGTA report is an information analysis only. The IRS watchdog did not make any recommendations to the agency as to how it might increase customer service.

You can bet, however, that Representatives will have some ideas when the House Ways and Means Subcommittee on Oversight holds a hearing Wednesday, April 22, to look at the 2015 tax filing season and the IRS' general operations.

There's no word yet on who the invited hearing witnesses will be, but I'm putting my money on Koskinen, Treasury Inspector General J. Russell George (or Michael E. McKenney, TIGTA Deputy Inspector General for Audit, who headed the filing season report) and perhaps National Taxpayer Advocate Nina Olson.

What is more certain is what will be said.

Koskinen (and Olson if she's asked to appear) will make the case that the IRS needs more funding to do its jobs, from customer service to processing returns to catching tax fraud and going after tax cheats, properly.

The lawmakers, particularly Republican Representatives, will say that the agency simply needs to better prioritize and work more efficiently.

In past hearings, Oversight Subcommittee Chairman Peter Roskam (R-Ill.) has called the argument that the IRS lacks resources to operate efficiently "laughable."

Don't look for much laughing from either side at this week's hearing.

Did you try to get help from the IRS, in person or on the phone, this filing season? If so, what was your experience?

Or did you depend on online IRS help? In that case, did you find the IRS.gov and related options sufficient?

I'm not surprised by this! With all the budget cuts they've had the past few years, it's difficult to continue providing good service. They're also trying to do more to cut down on fraud, but they aren't very efficient with that either. I have a astounding TWO FORMS, a W-2 and 1098-T on my return this year, and I got a letter saying my return was being reviewed and to check in after 60 days. I checked in at 63 days and they hadn't even looked at my return yet so now I have to wait 45 more days. I understand that the IRS is massive so efficiency is a tough thing to master, but I'm excited to see what they come up with to improve the system.