Everything is bigger in Texas.

While millions of Americans were filing their annual tax returns on April 15, Internal Revenue Service lawyers were in Dallas Bankruptcy Court filing what is believed to be a record $3.23 billion in tax liens against a Dallas man and his late brother's estate. 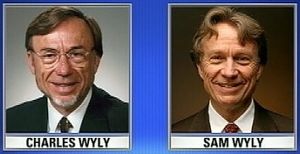 Sam Wyly and his older brother Charles, who died in a car crash in 2011, were well-known Dallas businessmen, philanthropists and at one point very rich.

In 2006, Forbes magazine estimated that Sam and Charles were worth $1 billion each.

Seeking tax shelter payments: The IRS alleges that Sam Wyly now owes Uncle Sam $2.03 billion in back taxes, penalties and interest from income generated from trusts he and his brother established on the Isle of Man more than two decades ago.

The tax agency is seeking another $1.2 billion also from allegedly unpaid offshore trust taxes, plus penalties and interest, from the Charles Wyly estate.

The trusts reportedly are worth about $382 million. Court documents indicate that Sam Wyly gets around $16 million a year from the accounts.

The IRS contends that the trusts were used to hide the brothers' ownership of, and gain from the sale of, stock in publicly traded corporations on whose boards of directors the brothers served.

Biggest lien ever: It's the consensus of tax lawyers that the liens against the Wylys represent the largest penalties ever sought by the IRS against individuals.

The combined $3.23 billion in liens against the Wylys also is this week's By the Numbers figure.

The federal tax lien is just the latest run-in the Wyly brothers have had with pone of Uncle Sam's agencies. The brothers, individually and Charles' estate, fought for nearly a decade with the Securities and Exchange Commission, again over fraud charges involving the same Isle of Man trusts.

The battle ended in May 2014 when a civil jury found the brothers guilty. A $198 million fine was levied against Sam, $101 million against the Charles Wyly estate. The fines were approved by a Federal judge in February.

IRS charges are 'baloney': As for the IRS legal action, Sam Wyly told the Dallas Morning News that "the IRS figures are baloney."

"I paid $160 million in taxes in the last 22 years, and my brother, Charles, paid $80 million. We firmly believe we have paid all the taxes we owe," Wyly told the newspaper. "We believe the IRS figures are so absurd as to undermine the credibility of the IRS."