Henry Paulson was running the U.S. Treasury when the country encountered its worst financial crisis since the Great Depression. Now he's warning of a climate crisis that could be even worse.

Paulson served as Treasury Secretary during the last two years of George W. Bush's presidency, but is most widely known as the man in charge during what came to be known as the bailout of the U.S. financial system.

During that 2008 crisis, Paulson directed billions of dollars to banks and other financial institutions to cover their losses from distressed assets, primarily especially subprime mortgage backed securities.

A worse, worldwide crisis: But that crisis, Paulson now says, is nothing compared to what the world might face if we don't soon take action globally to deal with climate change.

You heard right. A Republican who once was in charge of the country's money uttered the words climate change. He even did so on tape, in a feature aired recently by CBS News. 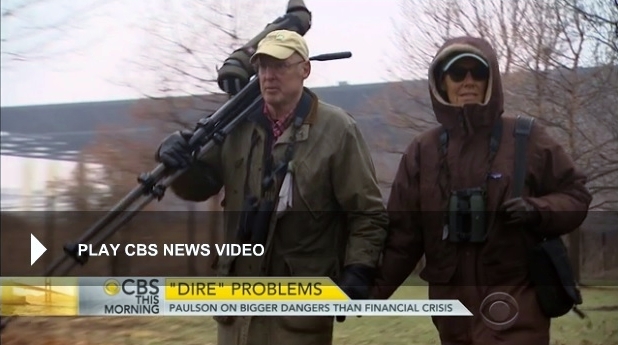 In the interview by CBS News correspondent Jan Crawford, Paulson said the unchecked consequences of climate change are even more dire than the financial crisis he oversaw.

A big part of the reason for the environmental concern is China.

Almost any global crisis will be easier to solve if we work with that Asian economic giant, which soon will be the world's leading economy. As part of that growth, China has edged out the U.S. in the production of greenhouse gasses. That was obvious from images broadcast during the Beijing Olympics.

If China is not successful in dealing with its environmental problems, its economy will suffer. If that happens, says Paulson in interviews he's given in connection with his new book "Dealing With China: An Insider Unmasks the New Economic Superpower," it will "hurt us all, the world will feel the effect."

Extended environmental efforts: Paulson created the Paulson Institute in 2011 to support environmental and sustainable development projects and research on economics and the environment in the United States and China.

His goal, says Paulson, is that his grandchildren grow up in a safe, prosperous world that has a clean environment.

To that end, Paulson and his wife Wendy plan to ultimately give away most of their net worth, estimated at $800 million, to charities that support environment causes.

Support for carbon tax: While I was surprised, and pleased, to learn that the Paulsons are bird watchers, his interest in broader environmental issues is not new.

In an op-ed piece Paulson wrote for the New York Times last summer, he warned of a "climate bubble that poses enormous risks to both our environment and economy. The warning signs are clear and growing more urgent as the risks go unchecked. This is a crisis we can't afford to ignore."

He even argued in that piece for a carbon tax.

He also acknowledged his own party's steadfast opposition to many climate change proposals. While Republicans are "right to consider the economic implications," Paulson wrote, "we must not lose sight of the profound economic risks of doing nothing."

A new white paper from the Paulson Institute also makes the case for carbon taxes.

On this Earth Day 2015 and every subsequent day, Paulson's climate change words are well worth considering.