Capitol Hill is in the throes of contentious budget negotiations. 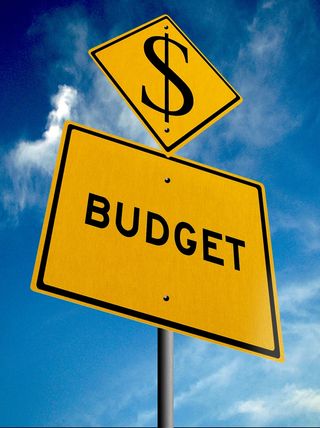 The process is complicated not only by the differing political priorities of Democrats and Republicans, but also the somewhat competing stances of GOP members, some of whom have higher political aspirations.

Both sides of the Hill agreed on their fiscal plans in late March. Now they must reconcile the two.

With the GOP in control of both chambers, the House and Senate fiscal year 2016 budgets actually are pretty similar.

Both want to fast-track a measure that would repeal Obamacare, as well as add more money for defense projects.

Balanced bottom line: They also want Uncle Sam to have a balanced budget within 10 years.

"Passing a balanced budget is about restoring the trust of the American people, because the federal government's chronic overspending and exploding debt threatens each and every American," said Senate Budget Committee Chairman Mike Enzi (R-Wyo.) at the first public budget hearing on April 20.

House Budget Committee Chairman Tom Price (R-Ga.) agreed. "A balanced budget can be and ought to be achieved without raising taxes. Washington does not need to take more from hard-working Americans -- it needs to start living within its means," Price said in his opening statement.

Opposition lined up against the measure: Democrats obviously oppose many, OK most, of the GOP proposals.

Sen. Bernie Sanders, the officially Independent but decidedly liberal-leaning lawmaker representing Vermont, views the GOP budget measures as an assault on the poor and working class. He cited not only the proposed Affordable Care Act repeal, but also cuts to student loans, Medicaid and food stamps.

One of the most vocal is the left-leaning Center on Budget and Policy Priorities (CBPP). The Washington, D.C., nonprofit has listed what it calls 10 serious flaws in the House and Senate budget plans.

As expected, they focus on programs that would adversely affect programs for low- and moderate-income Americans.

A toll on transportation money: But one spending issued cited by CBPP that would be felt across the economic spectrum is the proposal to make deep cuts in the country's transportation infrastructure.

"The House and Senate budgets cut highway and mass transit funding by an average of about 28 and 22 percent, respectively, over the next decade," writes CBPP President Robert Greenstein.

"To be sure, gas tax revenues for the Highway Trust Fund have fallen as fuel efficiency has risen, leaving a shortfall in the financing of highways and mass transit," Greenstein continues. 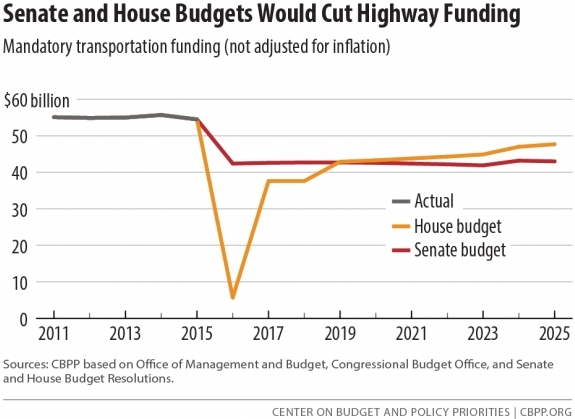 "But rather than finding new financing to avoid cuts in this funding -- as Congress has routinely done over the past decade -- the House and Senate budgets both chose to reduce needed investment in transportation infrastructure. Notably the House proposes to cut funding dramatically in 2016, by roughly 90 percent, as a way to address the shortfall in the trust fund," Greenstein notes.

As the graph above shows, the House funding reductions would be less severe in future years, but overall transportation funding would still be significantly below the current level for the entire decade.

All taxes are local: As a driver who is tired of weaving around potholes and dealing detours along stalled highway improvements, I totally agree with CBPP's blasting of cuts in the transportation area.

Yes, I sound selfish. But, as the paraphrased old saying goes, all taxes are local. Things usually don't change until and unless a critical mass of the citizenry finds itself inconvenienced.

So check out the House and Senate budget proposals that lawmakers are working to meld and see what might make a difference, for ill or good, to you.

Or maybe you'll agree with Sen. Sheldon Whitehouse (D-R.I.) who believes that "if Republicans did actually apply this budget, once the American people got a good look at its extremism and its favoritism, it would put a quick end to the Republican [Congressional] majorities."

Oh great. Its 2015 year going on and we are planning for upcoming years of budget reconciliation to keep in mind that battle begins what a Useful and marvelous thinking. I really like your blog. Thanks for sharing. Keep it up.