What's worse than going to file your federal tax return and discovering your identity has been stolen?

Finding out you're dead.

OK. Technically you're still with us if you're trying to file a 1040. But when you're as good as dead to Uncle Sam, you are out of luck in collecting your tax refund.

That's what happened to Sarah Jewell of Sparta, Michigan. 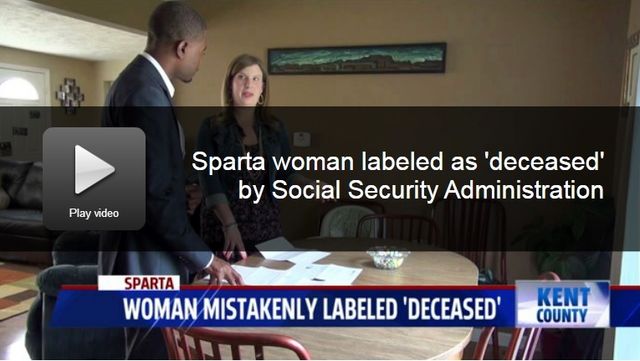 Sarah Jewell explains how being declared deceased poses tax filing and other problems to Darren Cunningham of Fox17.

Jewell discovered her mistaken demise when she filed her federal tax return in February. Instead of the refund she expected, the Internal Revenue Service sent her a letter saying that her Social Security number indicates that she is dead.

The IRS told her to contact her local Social Security office if -- yes, if; you've got to love the IRS making sure not to take anything for granted -- the deceased data was erroneous.

Jewell told her local Fox television station that she showed up at the Social Security Administration (SSA) office in person and announce "I'm alive!"

Yep, that morbidly named database is real. Death, or the record of all of them, even has Facebook (51 likes) and Twitter (23 followers) accounts.

According to the Death Master File website, the file contains more than 86 million records created from SSA payment records. The information in the DMF includes, if the data are available to the SSA, each decedent's Social Security number, name, date of birth and date of death.

But, notes the DMF site, the SSA does not guarantee the veracity of the file. "Thus, the absence of a particular person is not proof this person is alive," according to the website.

And the inclusion of a particular person obviously is not proof that person is dead.

A spokesman for the SSA told Fox17 that erroneous death reports are rare. Out of nearly 3 million deaths each year, 9,000 living Americans are misreported as dead. That's a minuscule 0.30 percent of mistaken death filings.

But if you're in that fractional group, it's a big deal.

Dealing with being mistakenly declared dead: In addition to tax troubles, you could encounter all sorts of financial and credit issues.

Government agencies (like the IRS), banks and businesses reclassify the deceased in their files. The intent is good: stop hackers from assuming a person's identity postmortem and doing even more damage.

But it makes it hard for the still living to go about, well, life.

Christina Lavingia, in an article for Daily Finance, offers some steps to clear your name and credit and prove you're alive if a false death report produces problem:

Jewell hasn't gone as far as number five yet, but….

Since her initial contact with the Social Security office, which she said went well and left her with the impression that her mistaken death would be quickly corrected, she's still waiting for her tax refund. She's also worrying about other aspects of her life that are affected or about to become an issue as long as she remains officially dead.

The Fox17 Problem SolversSaSa crew is now involved and applying public pressure. Here's hoping Jewell soon will be properly counted among the living.