It's not unusual that the big news this filing season is the growing concern about tax identity theft as a way to get fraudulent refunds.

But it is a bit surprising that the crime has spread so quickly and widely to state tax departments.

That's why many tax officials across the United States are employing creative ways to stop tax ID thieves.

Take, for example, Ohio. The Buckeye State is requiring some filers to take an online quiz to prove that they are legitimate taxpayers who are due the refund shown on returns the tax agency has received.

The Ohio Department of Taxation's quiz, however, is getting a failing grade from some honest filers whose refunds are delayed until they can pass the test.

Quiz letters issued: In cases where a returns looks suspicious, taxpayers have received a letter from the Department of Taxation instructing them to go online and take a four-question, multiple choice quiz to confirm that they are the rightful filers. 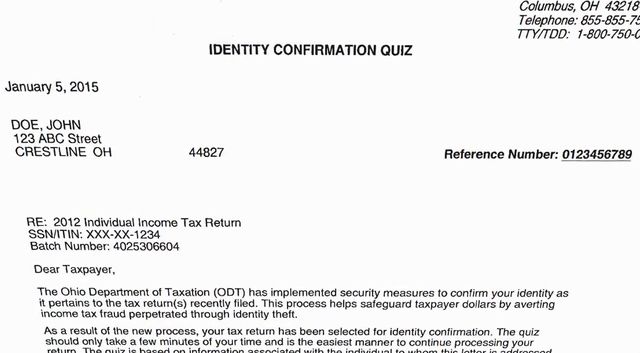 Click image to view the Ohio Department of Taxation video about the potential ID theft quiz.

Ohio tax officials have chosen "to be more stringent with the screening of returns," according to Gary Gudmundson, the agency's communications director, because last year the state stopped more than $265 million in attempted fraudulent returns. Before 2014, tax fraud in Ohio averaged just around $10 million a year.

Cramming for the tax ID quiz: Ohioans who get the letter have 60 days to take the quiz. The online test is timed and taxpayers will know immediately if they passed.

If the filer's identity is confirmed, his or her tax return and refund will continue to be processed. If the test-taker fails, the taxpayer can take the quiz a second time.

But if the individual fails the quiz twice, he or she must provide Ohio tax officials with paper identity documentation.

The ID confirmation material includes a valid photo ID, such as state driver's license, state-issued ID card, current passport or military ID. You must also provide a copy of your birth certificate or a current utility bill in your name at the address shown on your Ohio tax return.

One test-taker who didn't know the answers to her personalized quiz questions told the Cincinnati Enquirer that the process was disheartening. "My husband and I have been married 46 years, lived in Jackson County, Ohio, all our lives and have never been questioned before," she said.

Other taxpayers are concerned that the quiz itself is a scam. It's not.

Greater taxpaying good: State officials acknowledge that the process can be frustrating for those who can't answer the online questions, which come from various public and commercial data sources.

But the number of Ohio taxpayers who fail the quiz is small, according to the state. Early reports cited a 10 percent failure rate; the state now says it's more like 3 percent.

The tax agency also has re-examined the standards it uses to determine whether someone requesting a refund needs additional screening.

But such "nibbling around the edges" is as far as the state is willing to go. And it's standing by its taxpayer refund ID quiz.

"We have to stay a step ahead of the would-be thieves and block refunds from going out to people they shouldn't go to," said Ohio Tax Commissioner Joe Testa.

Here is the real question. Since, they receive payments from me through my bank account on line and they have my address on the return which has not changed, what is their concern? Not like I am asking them to send it to an unknown address or deposit in an unknown bank account. Are they just gathering data or are they so inept that they can't figure out a legitimate refund, so they just chose to use my time and resources to do their job for them? Probably both! I flunked my test (probably forgot the model of a car) but I successfully passed my husbands, now I have to call them (great that should be fun) and/or send them private information ( minimum of 4 items) . The only people they could play this scam on is people they owe money to.

Two of the questions were about my sister.
We have not lived in the same home since the early 1980s and
she and her husband have moved several times since then.
I don't understand why I was asked about where she was living. What if I was no longer in touch with my sister?
Some families have fights/a falling out, and people don't speak to each other for years. Lucky for me, my sister and I have a great relationship. I found those 2 questions odd.

Carol, so sorry to hear of your problems.

Did a call to the Ohio Dept of Revenue not help? (800) 282-1780
Also email with online form https://www.tax.state.oh.us/email/TaxMailWeb/global_emailus.html

Failed Test. Trying to fax ALL documents to the fax number listed. Fax fails on the fourth page every time. The fax machine I am using has received and sent faxes with no problem. Now what?

Why are senior citizens receiving this quiz letter, when they aren't due a refund? They get confused thinking its the Federal Refund. These people have lived at the same address for 58 years, same info. The stress this quiz is creating should be looked at by the Ohio Department of Taxation. Most seniors don't know how to google this to find out what is truly going on. There has to be a better way to handle this problem.