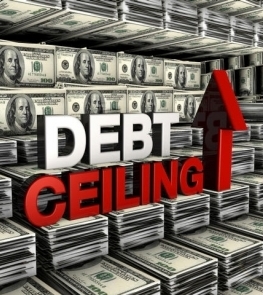 Next week should be fun.

That deadline day is this week's By the Numbers figure.

Lew, in a letter to Congressional leaders on both sides of the aisle, points out, just in case any lawmakers are unclear, that increasing the debt limit does not authorize new spending commitments.

"It simply allows the government to pay for expenditures Congress has already approved, thereby protecting the full faith and credit of the United States," writes Lew.

Time ticking down on temp measure: Congress passed a temporary debt limit extension in February 2014. That suspended the statutory debt limit through next Sunday, March 15.

In preparation for the March 16 deadline, Lew told House and Senate members that Treasury will begin taking "extraordinary measures" to finance the government on a temporary basis on Friday, March 13. On that day, absent a debt extension, Lew wrote that his office will be forced to suspend the issuance of State and Local Government Series (SLGS) securities.

SLGS are special-purpose Treasury securities issued to states and municipalities to assist them in conforming to certain tax rules. "When Treasury issues SLGS, they count against the debt limit," wrote Lew.

As for the debt limit, Lew noted that only Congress has the authority to increase the U.S. borrowing authority, "and I hope that Congress will address this matter without controversy or brinksmanship."

I fear that members of the most conservative faction of the now-in-Congressional-control Republican Party might have other thoughts.

They are still ticked at what they perceive as moderate GOP squishiness acquiescence in funding Homeland Security without any challenge to Obama's immigration executive order. They could see the debt ceiling situation as another way to exert their power and hammer White House policies.

Then there are timing concerns.

In addition to the SLGS moves, a recent Congressional Budget Office report estimated that the various measures Lew can employ could put off the ultimate debt ceiling drop dead date until October or November.

That would line up with the end of one and start of another fiscal year.

Remember what happened with similar timing back in 2011?

A standoff in Congress four years ago brought the country close to an unprecedented debt default. That crisis was resolved with a budget deal that automatic spending constraints, known as sequestration, in place through 2021.

Then there was 2013. Uncle Sam was forced into a 16-day government shutdown by angry Republicans.

Senate Majority Leader Mitch McConnell (R-Ky.) stated after taking over leadership of that chamber earlier this year that his party would not shut down the government or fail to raise the debt limit. His House counterpart, Speaker John Boehner (R-Ohio), has said now that his party is in full control it is ready to govern.

Like Lew, I hope that McConnell, Boehner and their counterparts on the Democratic side can avoid the drama this time and raise the debt limit as soon as possible.

But on Capitol Hill, nothing is ever easy or assured.