Sunday's Daytona 500 was great. Well, it was until a late-race wreck forced a contrived green-white-checkers finish and the dreaded but always expected "big one" mass crash at the back of the field.

Despite that disappointment, congratulations to 2015 Daytona 500 champion Joey Logano. He deserves the trophy. He and his #22 Shell Ford were the class of the field all day.

Daytona is the first NASCAR race every season. It's the sport's Super Bowl and an event the stock car community prizes.

A few years ago, NASCAR set out to memorialize past and future Daytona 500s and other notable competitors and racing events at a spanking new Hall of Fame. 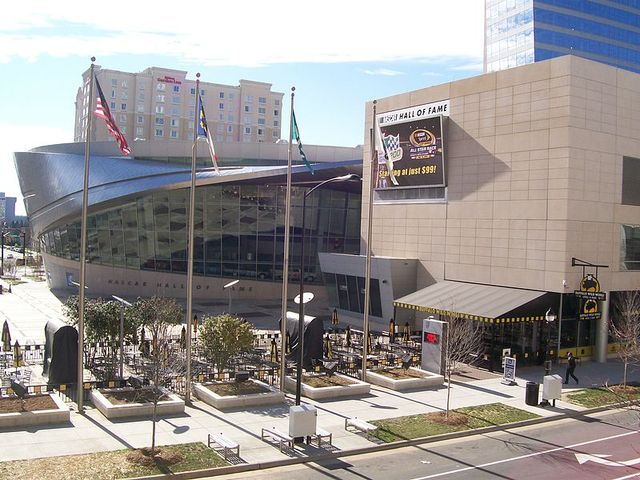 NASCAR Hall of Fame in Charlotte, North Carolina, as seen from the city's convention center in July 2012. Photo by Groupuscule via Wikimedia.

That endeavor, however, has stumbled.

Bailout for NASCAR venue: Since its opening in 2010 in Charlotte, North Carolina, the facility has not had a good run. Attendance is not what was hoped or projected, corporate sponsorship has dwindled, and last month two major banks, with approval of and $5 million from city leaders, wrote off almost $18 million in loans to the Hall.

Losing money is a risk every city takes when it uses taxpayer dollars to fund sporting facilities.

Sometimes, but not often, the expenditure of public dollars for sporting purposes is a good investment, as least from the rah-rah, we're a major league city perspective. Most of the time, though, the highly touted projects end up costing taxpayers even more.

But we love our sports and politicians love the ability to rub shoulders with professional athletes at marquee events. So the deals keep getting made.

Some homeowners struggling to make payments on mortgages from Wells Fargo and Bank of America are stunned and angry that the banks agreed to write off NASCAR's $17.6 million debt, but won't extend the same financial courtesy to restructuring their loans as they fend off foreclosure.

Officials from both banks told the Charlotte Observer that the financial institutions have committed thousands of employees to help homeowners behind on their payments. The newspaper reports that since 2008, Bank of America has modified more than 1.3 million home loans, while Wells Fargo has provided customers more than 900,000 mortgage modifications since 2009.

Still, there has "not been an appearance of fairness to the public on who has been and who has not been hurt" in the financial crisis, Peter Skillern told the Observer.

"We've seen bank executives receive tens of millions of dollars in bonuses while they lay off thousands of employees," said Skillern, whose Durham-based Reinvestment Partners advocates for homeowners facing foreclosure. "Some homes have been saved, and others have not. It's reflected by the NASCAR Hall of Fame getting a loan forgiven."

Federal loan tax forgiveness: When consumer debt is forgiven by a lender, that amount usually is considered taxable income.

Some homeowners, however, are still getting some 2014 tax-year relief thanks to a provision in the tax extenders package that was approved as the lame duck Congress wrapped up last December.

First enacted as part of the Mortgage Debt Relief Act of 2007, this law allows qualifying taxpayers to exclude income from the discharge of debt on their principal residence. This covers home loan debt reduced through mortgage restructuring, as well as mortgage debt forgiven in connection with a foreclosure.

Up to $2 million of forgiven home loan debt, $1 million if married filing separately, is eligible for this exclusion. Debt used to refinance your home also qualifies, but only to the extent that the principal balance of the old mortgage, immediately before the refinancing, would have qualified.

Forgiven debt tax forms: If your lender forgives some or all of your mortgage debt, you should receive a Form 1099-C, Cancellation of Debt. The amount of debt forgiven or canceled will be shown in box 2.

You must report that 1099-C amount on Internal Revenue Service Form 982, which you submit with your tax return.

If you are using Form 982 just to report the exclusion of home loan debt forgiveness due to foreclosure on your principal residence, you only need to complete lines 1e and 2. If you retained ownership of your home and the terms of your mortgage were modified to reduce some debt, complete lines 1e, 2, and 10b.

Circling back to NASCAR tax breaks: The homeowner debt forgiveness provision is one welcome by many property owners and consumer advocate groups.

But this individual tax benefit also has a connection to NASCAR.

Joining the home loan debt income exclusion in the tax extenders package is a provision that allows NASCAR and other race track owners to deduct the cost of improving their facilities at a much faster rate than other businesses.

All of the extenders were approved only through the 2014 tax year. They must be renewed again this year for 2015 and beyond tax purposes.

It's unclear if, how or when that will happen in the 114th Congress.

Senators and Representatives have yet to decide.

But you can be sure of one thing. Individual homeowners and NASCAR track owners will be watching closely and lobbying for their continued tax breaks.