I grew up in West Texas, where the wind sweeping down the desert rivals any Oklahoma show tune boast.

So it's no surprise to me that wind power is big in the Lone Star State. In fact, it took Texas wind energy producers just 11 months to break last year's record for generation. 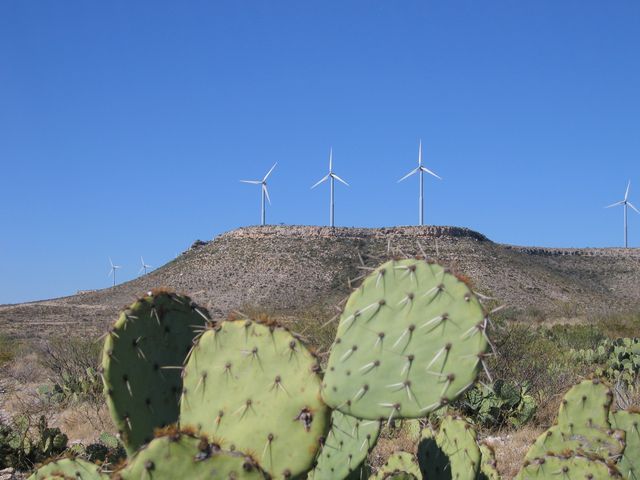 Electricity-generating giant turbines on the Desert Sky Wind Farm near the West Texas town of Iraan. (Photo by Pismo, own work licensed under Public Domain via Wikimedia Commons)

The Electric Reliability Council of Texas (ERCOT) reports that through November, wind power generated 33.2 million megawatt hours (MWh) of electricity. That's 511,068 MWh more than was generated by wind during all of 2013.

Such success is one reason that many folks are opposed to the tax break for wind energy.

The credit of 2.3 cents per kilowatt-hour for the first 10 years of operations at a wind farm is one of the tax extenders, officially known as the Tax Increase Prevention Act of 2014, that was finally enacted for 2014 on Dec. 19. The 2.3 cent credit also is this week's By the Numbers figure.

In addition to wind energy, the provision also offers tax credits to other renewable energy producers. But it was wind industry subsidies that generated lots of Capitol Hill debate during consideration of the extenders bill.

Both sides upset: Wind energy projects have accounted for 30 percent of all new U.S. power capacity during the last five years, according to the American Wind Energy Association.

Opponents of the tax credit say the industry's expansion and success, as seen in Texas, are clear evidence that wind is an established source of energy and shouldn't receive any tax breaks.

Of course, as is often the case with Congress, both sides are unhappy.

Opponents didn't want the tax break continued at all.

"That's a form of corporate welfare, giving a tax credit to a particular industry, and we don't think that's a good use of taxpayer dollars," said Dave Trabert, president of the conservative-leaning Kansas Policy Institute.

Supporters also are upset because of the tax break's very limited duration. Since the energy credit was approved for 2014 only and so late in the year, new alternative energy producers had only a short window to get their projects going.

"Unfortunately, the extension to the end of 2014 will only allow minimal new wind development and it will have expired again by the time the new Congress convenes," said Tom Kiernan, CEO of American Wind Energy Association. "There will be a lot of work to do as soon as possible in the new year to keep this important sector of the economy growing by providing longer term policy support."

Yep, look for there to be plenty of hot air, not just across Texas, but also in the halls of Congress next year as this issue is revisited, either as part of the next extenders bill, a free-standing piece of legislation or in tax reform talks.