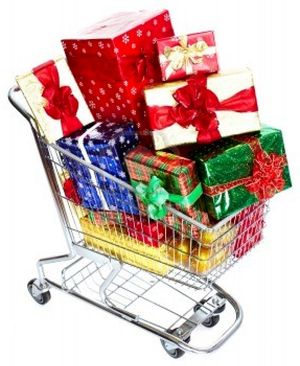 The hubby and I performed our annual holiday ritual today. We bought some toys for Austin area kids who might otherwise find no presents under their Christmas trees on Dec. 25.

Our December contributions are to the Blue Santa program, which partners with several local businesses to raise money and collect the toy donations. We always drop ours off at our neighborhood Chuy's restaurant. That way we get to eat Tex-Mex as a reward for our good deed.

Presents price tag: We noticed that the goodies jammed in our shopping cart were a bit more expensive than last year's batch. Maybe we crammed more into the basket. Maybe we bought pricier presents. Or maybe the prices have simply gone up.

If the analysts at PNC Wealth Management are to be believed, it's not inflation.

The financial services firm's annual Christmas Price Index (CPI) shows a minimal one percent boost in its 31st annual tongue-in-cheek look at what the gifts sung about in the "The 12 Days of Christmas" carol cost.

The Comeback of the Christmas Carol video

This year, the PNC CPI's increase is close to Uncle Sam's CPI, the Consumer Price Index, which stands at 1.7 percent for the past 12 months through October. The government's core index, removing volatile food and energy prices, is up 1.8 percent.

"The recurring theme seems to be that with energy prices and labor costs contained, the overall index increase has been modest despite a few large increases in individual items," said Jim Dunigan, chief investment officer at PNC Wealth Management.

Priciest song lyric: So which lyrical gift costs the most this holiday season?

On a pure dollar basis, the biggest price tag is attached to the Nine Ladies Dancing. But the $7,552.84 it would take to hire the troupe is the same cost as in 2013.

And while online shopping might be easier, it's also more expensive if you're buying the Christmas song's gifts. The prices for brick-and-mortar vs. Internet are detailed shown in the table below. 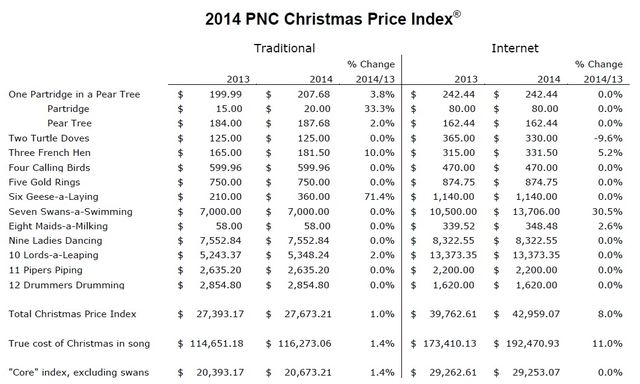 You also might have noticed the six-digit price tag in the table. That's for the true cost of Christmas in the song. That's the total cost of items gifted by a True Love who repeats all of the song's verses. Such a love struck giver will fork over $116,273.06 for all 364 gifts.

Costliest Christmas over the years: The PNC CPI was launched in 1984 by a predecessor bank in Philadelphia. This year's index is 118 percent higher than when it all began, while inflation is up 127 percent over the same period. 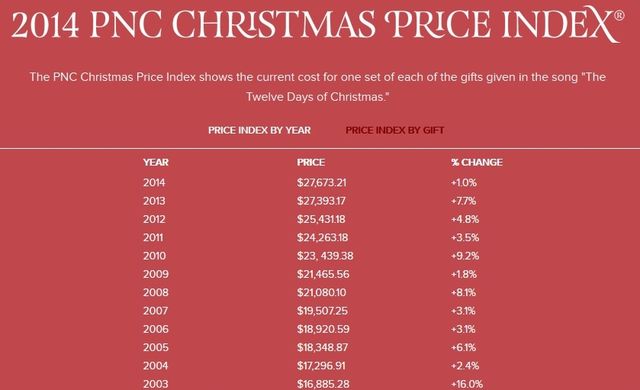 Click on the image to see even earlier inflation data.

Sharing your good fortune: The hubby and I are far from rich, so we do watch our expenses. But like lots of folks during the holidays, we also tend to splurge.

But every year it seems we need or want less and less. So we get a kick out of helping those who might not otherwise have a very merry Christmas.

And even though we have no kids of our own, we both cherish the holidays of our youth. Those memories remind us that no kid should be without a few gifts from Santa, whatever form he may take.

If you're financially able and so inclined, we urge you to remember those less fortunate this time of year.

And here's the tax hook. If you give to an Internal Revenue Service qualified charity and itemize, you'll get a present for yourself as a deduction when you file your taxes next spring.