Look out for phishing scam from fake Treasury Secretary

Dang! I wish I had checked my spam folder before Christmas. I would have had half a million bucks to buy the hubby (and myself) some really nice gifts.

So says Jacob "Jack" Lew, the 76th Secretary of the Treasury, in an email message he recently sent me.

Jack is so proud of his numeric position, he repeats it three times, as well as notes that the Department of Treasury is the "executive agency responsible for promoting economic prosperity and ensuring the financial security of the United States." 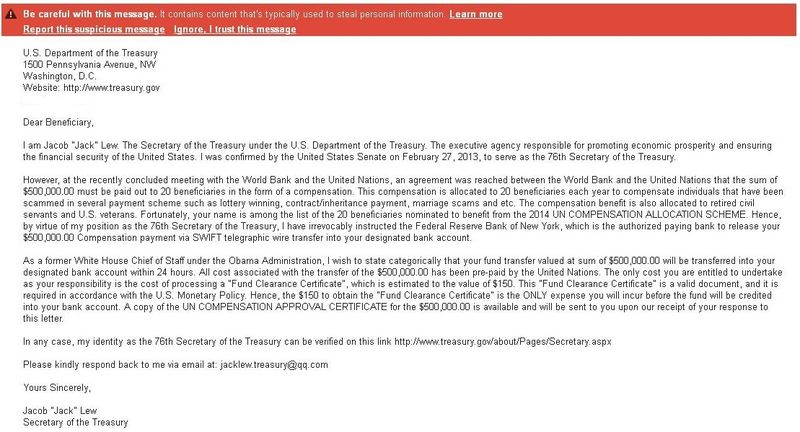 Click for a larger image of the fake Jack Lew scam email.

As for my own financial security, Jack says I'm one of 20 beneficiaries selected via an agreement between the World Bank and United Nations to get $500,000.

"This compensation is allocated … each year to compensate individuals that have been scammed in several payment scheme (sic) such as lottery winning, contract/inheritance payment, marriage scams and etc.," says Jack.

All I and the 19 other recipients of this special personal message from Jack Lew need to do is pay $150 for the processing of a "Fund Clearance Certificate." Upon completion of that task, Jack will release my $500 grand "via SWIFT telegraphic wire transfer" to my designated bank account.

Scam red flags: Even without the Gmail red warning banner, this phishing scam was painfully obvious.

The spelling and grammar were better than many similar attempts, but the phrasing still was very stilted.

Then there was the email address I was to use to take advantage of this windfall: jacklew.treasury@qq.com. qq.com? Really?

The email also utilized a common con artist technique, employing a legitimate component. As verification of his identity and position as the 76th Secretary of the Treasury, good old Jack provided a link to the real U.S. Treasury website's "about the Secretary" page.

And in an effort to allay any doubts I or the other lucky recipients of Jack's email might have, the crooks had the audacity to reference similar schemes as the reason for the fake payout.

Surely a criminal wouldn't talk about cybercrime if he/she was trying to commit the same? Yeah, right.

The email at least provided a laugh (and a blog post). I hope it also serves as a warning as we're about to head into the 2015 tax filing season.

Criminals are always looking for ways to separate folks from their tax refunds.

So be on the lookout for fake emails or phone calls in the coming months, especially ones purportedly from Jack Lew's colleague John Koskinen, the 48th Commissioner of the Internal Revenue Service.

I got the same email but this one said 65,000 from scams that recently happened which has happened I'm going to call the REAL state treasury in the morning and find out what to do its NOT right to do this and its a shame people fall for it and loose thier money I wish there was a way to get these losers and press charges

I'm always weary about these types of scams