Have you filled up your car lately? If so, you were probably like me. Very pleasantly surprised. 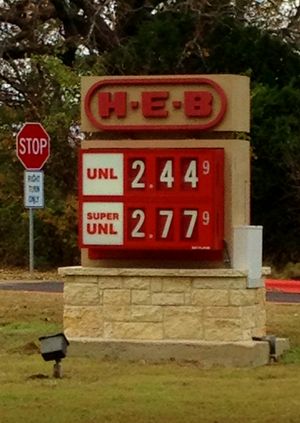 Gas prices have been falling. Just last week when I snapped the price board at a nearby station, a gallon of regular was $2.45.

That's 15 cents less than AAA's national average price of $2.60 on Dec. 12. And fuel industry experts expect the prices to drop even more.

With pump prices the lowest they've been in four years, many say that now is the perfect time to raise the federal gasoline tax.

That tax has been 18.4 cents a gallon since 1993. That low rate and longevity earn both those federal gas tax figures this week's By the Numbers honor.

Fewer dollars to fix our roads: Gas tax money goes toward federal highway projects and repairs. But with more fuel-efficient cars and dropping prices, the Highway Trust Fund is not keeping pace with U.S. roadway needs.

It almost went broke a few months ago, but Congress managed to cut a deal to keep it solvent through May.

When it comes time to revisit the trust fund's financing mechanism in the 114th Congress, the low gas prices would make an increase in the tax less noticeable.

Such a move was unthinkable when gas prices hit $4 or more during the recent recession. But with gas prices much lower, consumers wouldn't take as hard a hit from the hike.

But even if today's lower pump prices hold on until the issue comes up again in the spring, the idea isn't likely to get much traction.

"I think it's too toxic and continues to be too toxic," said former Ohio Congressman Steve LaTourette told The Atlantic magazine. "I see no political will to get this done."

LaTourette is probably right. But expect some lawmakers to take another run at a gas tax hike during the next Highway Trust Fund battle.

Gas prices, mileage deduction rates: Every year, inflation affects how much we can contribute to retirement accounts, along with more than 40 other tax provisions, such as income tax brackets and standard deductions amounts.

It also can make a difference in how much you can claim for various tax-related vehicular travel. At the end of every year, the Internal Revenue Service announces the standard mileage deduction rates for business, moving and medical miles.

Gasoline prices also come into play in calculating these tax rates. The IRS notes that its annual standard mileage rate for business is based on the yearly look at the fixed and variable costs of operating an automobile, including depreciation, insurance, repairs, tires, maintenance and, yes, gas and oil.

The rate for medical and moving purposes is based solely on the variable costs, such as gas and oil.

That's why, as the table below comparing 2014 and 2015 mileage rates shows, you can write-off a penny and a half more for each business mile in 2015, but the moving and medical cents-per-mile deduction is a bit lower next year.

And that charitable rate that's still 14 cents per mile? Neither the IRS nor inflation has any control over that rate. It's set by Congress.

So if you drive in service of your favorite charity -- delivering food to shut-ins, taking youth groups on field trips, etc. -- and believe you should be able to claim more for those miles when you itemize deductions, let your Representative and Senators know.