The latest annual look by the Taxpayer Oversight Board at what we think of our tax system found that the majority of taxpayers support more funding for Internal Revenue Service services and enforcement. 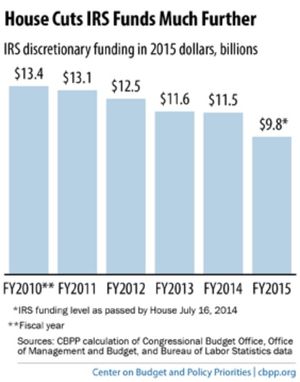 The House on Dec. 11 and Senate late Dec. 13 decided, however, to slash IRS funding through Sept. 30, 2015. That's when the two chambers approved a funding bill for the rest of fiscal year 2015. The president has said he will sign the legislation.

Not surprisingly, the GOP led the IRS budget cutting brigade, arguing that cutting the agency's funding is the best way to stem IRS "regulatory overreach."

"We're just trying to say to them, 'Look, do the things you're supposed to do and stop wasting money on conferences and breaking rules,'" said Rep. Ander Crenshaw (R-Fla.), chairman of the House Financial Services and General Government Subcommittee.

The rule breaking was a reference to the 501(c)(4) mess, in which the IRS mishandled a variety of groups' applications for nonprofit status.

Although IRS employees used improper evaluation techniques on groups across the political spectrum, conservative Republicans have honed in on Tea Party related groups that had trouble getting the favorable tax-exempt designation.

IRS cleaning up its act: I agree that the IRS needs to straighten up and do its job better. And it has.

With new leadership, it's revised its video and conference procedures that produced so many problems, embarrassment and waste.

Reducing IRS money that the agency needs to do its main jobs -- collecting taxes from filers and going after those who refuse to pay -- is not wise. It might make federal lawmakers feel good, like angry parents taking away a kid's allowance, but it's counterproductive.

Paul Cherecwich Jr., chairman of the nine-member independent body charged with overseeing the agency, said in a statement that relentless IRS budget cuts are partially responsible for the public's growing dissatisfaction with the agency.

"The Board believes [the falling satisfaction levels] can be directly tied to deep cuts in IRS funding, which have served only to punish honest American taxpayers who must endure long wait times over the IRS toll-free telephone lines and at walk-in centers," he said.

"The IRS' budget and taxpayer needs are moving in opposite directions," Cherecwich continued. "This trend is not sustainable in either the short- or long-term and the effects can be seen both in declines in customer service and enforcement, and also lost opportunities."

Despite all the talk about tax simplification, Congress just cannot stop itself from passing new tax laws. And they tend to be more complicated.

This coming filing season, for example, the IRS will be dealing with for the first time millions of taxpayers who are claiming Affordable Care Act premium tax credits. Even if IRS operations were at optimal capacity, this would not be an easy task.

And then there are the extenders that are still hanging out there, with taxpayers and the IRS alike waiting for a decision so the agency and filers can get ready for April 15, 2015.

Giving the IRS less money to hire and train employees and update its technology infrastructure is not a smart move. The agency will at best tread water, but more likely slip deeper into a backlog and morass that will lead to even less customer, i.e., taxpayer, service and satisfaction.

It also will mean reduced enforcement efforts, allowing tax cheats to get away with more of the money that law-abiding taxpayers are faithfully putting into Uncle Sam's hands.

Right now, according to Treasury Secretary Jack Lew, the IRS yields $6 in collections for every $1 it receives for tax enforcement. That's a damn good return on investment.

Tax cheating is wrong: The topic of skimming from the U.S. Treasury also was an item examined in the Oversight Board's latest survey.

As I noted last week at my other tax blog, respondents to the Oversight Board's 2014 survey also overwhelmingly said that tax cheating is not OK.

Also over at my Bankrate Taxes Blog, I looked at the changes in 2015 in the standard mileage deduction rates.

I usually post at that personal finance website on Tuesdays and Thursdays. If you miss those items when they go live there, look for highlights and links here the following weekend.