If you celebrate Christmas, you've probably had your tree up for a while.

And if you got a real tree, you probably paid a little more for it this year.

One thing, though, that didn't add to your holiday tree's price hike was the so-called Christmas tree tax. 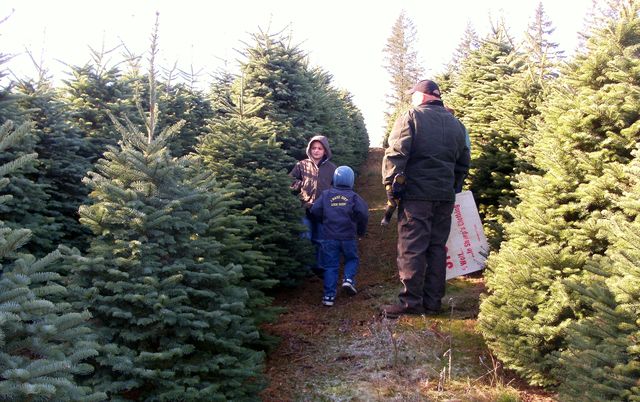 "Found it!" Picking the perfect Christmas tree at the tree farm photo by born1945 via Flickr.

Fee to promote real trees: It's part of a U.S. Department of Agriculture program that's generally supported by tree farmers. The 15 cents per cut tree fee is estimated to raise $2 million a year to promote the purchase of real Christmas trees. It is one of 22 similar commodity research and promotion programs, also known as checkoff programs, that the USDA currently oversees.

But the outcry, primarily by conservative media and groups, against "Obama's Christmas tree tax" stalled the fee's collection three years ago.

It's still on hold.

This year, as in prior holiday seasons, the USDA has delayed implementing the program. The postponement is because the Obama Administration has yet to appoint a governing board for the Christmas tree promotion program due to fears of a political backlash.

Axing the tree tax: One Texas congressman would love to do away with the fee entirely, but this holiday season took just a first step toward any possible repeal.

Republican Rep. Michael McCaul's Christmas Tree Tax Exclusion Act would have excluded small tree farmers who allow people to choose and cut their own holiday tannebaums from the marketing fee.

"Small producers, like Marc Nash of the Elgin CHRISTmas Tree Farm in my district, shouldn't be forced to tax their customers to pay for big agribusiness producers to market their products," McCaul said in a statement issued when he introduced H.R. 5827 on Dec. 10.

"While I support a full repeal of this misguided tax, I hope Congress can at least agree to exempt small choose and cut producers who sell directly to the final consumer," added McCaul.

Obviously McCaul's Christmas tree tax bill didn't go anywhere in the lame duck session, but that wasn't the reason for the bill.

In addition to sending a message to constituents, McCaul (and other Christmas tree fee opponents) wanted to get in one last whack in at the Obama Administration before the 113th Congress adjourned.

Taxes on fake trees: If you, like the hubby and I, have an artificial tree, you likely paid a real tax when you purchased it, your state's sales tax.

When we got our first fake tree three-plus decades ago, we did so mainly for financial reasons. We could get a passable artificial evergreen back then for a lot less than a real tree.

Over the years, we've upgraded. The newer, more life-like fake evergreens are much more expensive nowadays. Still, we've saved money by being able to use the same tree for many years, spreading the cost across multiple Christmas celebrations.

Fake tree trend: Despite the great looks and smell of real trees, more Americans are turning to artificial trees in order to avoid not only the annual costs, but also the added work of keeping a cut tree looking fresh. There's also the hassle of vacuuming all of those loose needles.

But even though more real trees were sold last year, the retail value of fakes was stronger, at $1.19 billion compared to $1.16 billion for real trees.

Statista's chart below shows the number of real and fake Christmas trees sold in the United States from 2007 to 2013.

Although we have a fake tree, we still have a bit of real greenery in our house. We buy a real wreath and hang it inside so we can enjoy that wonderful fir tree scent.

However you decorate for the holidays, we wish you the merriest nontaxing times!