5 tax-saving moves you can make by Dec. 31
Plus some ways to prepare now for your 2014 tax return filing 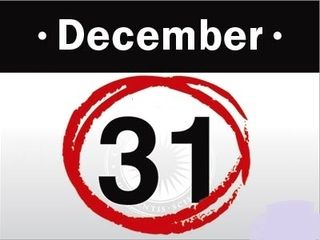 There are just two days left in the 2014 tax year. That's not much time, but folks determined to save on this year's taxes still have time to make a few year-end moves.

I was up at o'dark-thirty this morning to discuss some quick year-end tax tactics with KARN radio. If you weren't up at 6:10 a.m. (and why in heaven's name would you be!?) or aren't in the Little Rock, Arkansas, broadcast area, here's what I talked about (and more).

Do you itemize? If so, you have more tax-cutting options than those who claim the standard deduction. Here are three such year-end options for folks who fill out Schedule A.

1. Donate to charity. The easiest gift is a cash contribution, which is not just currency, but also a check or donation via credit card. You also can give your favorite charity some clothing or household goods that are in good shape, but which you no longer need or want. And yes, regifting to a charity that Christmas present you really didn't like is totally acceptable. As long as you follow the charitable giving tax rules, you can deduct these donations on your 2014 Schedule A.

2. Pay your state estimated taxes now. Most states follow the federal estimated tax payment schedule; that means the tax year's final quarterly payment isn't due until Jan. 15. But if you can afford to pay all of part of your final state estimated tax amount now, you can deduct that amount in the "Taxes You Paid" section of Schedule A.

3. Pay your January mortgage by Dec. 31. You can deduct that mortgage interest in the "Interest You Paid" portion of Schedule A.

If you don't itemize, all is not lost. Folks who claim the standard deduction, and that's most taxpayers, also can take some steps in these final days of 2014 to reduce their taxes.

4. Set up a self-employed retirement plan. This is a good idea anyway; tax savings are just a bonus. So if you are your own boss and don't have a retirement account, set one up by Dec. 31.

You don't have to contribute to it until the April filing deadline (or even as late as the Oct. 15 extension deadline if postpone your filing), but some self-employed retirement plans must be established by the end of the tax year. The amount you do eventually put into your self-employed retirement plan can be claimed as an above-the-line deduction in the "Adjusted Gross Income" section at the bottom of Form 1040. No itemizing required.

5. The write-off for educators' expenses is another above-the-line deduction. It was renewed for the 2014 tax year as part of the last-minute passage of the tax extenders. This tax break applies to teachers and some other school employees who spend their own money for classroom supplies. In these cases, eligible educators can deduct up to $250 of those out-of-personal-pocket school expenses. If you'll need some supplies next semester and haven't hit the $250 cap, buy them now and deduct them on your 2014 returns.

Preparing for 2014 filing: Now to get ready for the next filing season, which will be here in just three weeks.

As I predicted a couple of weeks ago -- yes, blatant back-patting since Congress had fogged up my crystal ball by it's crazy actions and delays -- tax-filing season will start on time next year. The official date is Jan. 20, 2015.

On that day, as I point out in today's Bankrate Taxes Blog (which will be my only post this last week at my other tax blog since we have the New Year's celebration and recovery on Wednesday and Thursday … and maybe Friday and Saturday, too!), the Internal Revenue Service will start accepting both paper and electronically filed tax returns for 2014.

Here are three things to do before then to be better prepared to file as soon as possible.

1. Pull out your 2013 return. If your personal and financial situations are essentially the same in 2014 as in 2013, this will give you a good idea of what to expect with your taxes since there were no major tax changes in 2014.

2. Know what tax forms to expect. For most folks this is W-2s from employers. A lot of companies/payroll management firms send these out to workers electronically, so check your email boxes. Some places get them out very quickly. For example, the hubby's last 2014 pay period was in mid-December, so he already has his W-2.

If your self-employed, either fulltime or did some side jobs in addition to your regular work, you'll likely get a 1099-MISC form with details on those earnings. You'll also get similar documentation, such as a 1099-INT, 1099-DIV or 1099-B, for investment income. Again, as with W-2s, many banks, investment and mutual fund companies and brokerages send these tax docs electronically.

The IRS gets copies of these and the other array of 1099s, just like it does with your W-2. You want to make sure you get all these forms and that they are correct because Uncle Sam will double check your return entries against the tax documents.

3. There's a new reporting form, 1095-A, for some folks this year. You'll see this document if you purchased health care insurance via the federal or a state marketplace this year and got a subsidy to help pay for the coverage. Form 1095-A will detail for you and the IRS that transaction.

This is a new form created for the Affordable Care Act, aka Obamacare. Be on the lookout for it and hang onto it when it arrives. You'll need it when you file your tax return to reconcile the amount of advance tax credit you got when you purchased your policy.

OK. That's enough for the last 48 hours of 2014. Plus, I have to catch a few more ZZZZs before I can face the rest of today!