Thanks for Thanksgiving movies and some movie tax breaks

It's day three -- or more for some -- of the Thanksgiving holiday. Are you tired of your relatives yet? 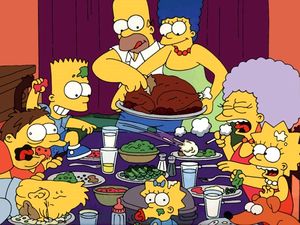 No judging here. The hubby and I tend to do our families and ourselves a favor and celebrate holidays on our own or show up for the big day only. Everyone can maintain for 24 hours or less at least a semblance (or façade) of patience and goodwill.

If, however, you're still in the midst of a mass of relatives, it may be time for a movie break.

A quick cinematic note. Most Thanksgiving movies tend to deal with crazy families whose members get on each other's nerves. Yep, clichés exist because there's an element of truth.

In some movies, reconciliation and redemption is found among the fictional families. In others, not so much.

But in most, the underlying theme is the love and seasonal spirit of gratitude.

And with that, here are my five favorite Thanksgiving flicks. Yes, some are, shall we say, a bit harsh in their takes on turkey day. I'd appreciate your reciprocal nonjudgmental holiday consideration of my film tastes. And feel free to leave your November holiday movie choices in the comments section.

Hannah and Her Sisters: In Woody Allen's look at the titular siblings, he focuses on buried family feelings. The 1986 Oscar winner is not everyone's cup of tea or whatever beverage you rely on to get you through holiday family gatherings. But you should give it a shot for the performances alone by film sisters Mia Farrow, Dianne Wiest and Barbara Hershey.

The Ice Storm: You can argue that this film is where director Ang Lee discovered the pent up rage he later used in The Hulk. At least this bleak drama about two 1970s middle-class Connecticut families that aren't as pristine as their public personas will make you appreciate your own clan.

Home for the Holidays: More family dysfunction, but at least things end on a somewhat cheerier note in this Holly Hunter, Robert Downey gem that was directed by Jodie Foster. The cast also includes the magnificent Anne Bancroft, Charles Durning and Claire Danes. Plus, it was filmed in Baltimore and has a fun soundtrack.

As for Home for the Holidays' climactic dinner scene, it took 10 days to film and used 64 turkeys, 20 pounds of mashed potatoes, 35 pounds of stuffing, 44 pies, 30 pounds of sweet potatoes, 18 bags of mini-marshmallows and 50 gallons of juice that stood in for wine. And you thought you had leftovers!

Pieces of April: Katie Holmes plays April, a young woman whose damaged family is coming for Thanksgiving dinner at her cramped New York City apartment. The always brilliant Patricia Clarkson is the bitter, cancer-stricken mom. Oliver Platt is the conciliatory father. And this quirky low-budget charmer quickly moves from the Thanksgiving-from-hell trope to instant holiday classic.

Broadway Danny Rose: Woody is back on the list, this time as the title character Danny Rose, a two-bit variety agent who represents a hodgepodge of terrible performers. Danny is loyal to his clients, but when the one with the most talent dumps him, just as Danny was about to get him on the prestigious Milton Berle show, Danny's faith is tested.

This isn't strictly a Thanksgiving movie, but it makes my list for two reasons.

First, there's the hilarious chase scene in the warehouse where Macy's Thanksgiving Day Parade balloons are housed. Yes, there is helium-tinged dialog.

Second, the movie ends on Thanksgiving Day. Danny is serving his oddball family of clients frozen turkey dinners. It is, notes one celebrant, the best Thanksgiving party so far.

And that motley collection underscores that Thanksgiving and family are who and what you want to make of the holiday.

Thankful, or not, for film tax credits: I don't know if any of my five favorite Thanksgiving movies were make using state tax credits. But lots of movies take advantage of the added state dollars.

Movie makers obviously are thankful for the millions of dollars in tax breaks. Workers employed on the films, television programs and other creative endeavors that qualify also are appreciative of the jobs.

But are the states and their taxpayers who are footing part of the films' finances?

As with most things tax, there's no one clear-cut answer.

Most questions and comments during the NCSL Executive Committee Task Force on State and Local Taxation meeting in Scottsdale, Arizona, were somewhere between reservedly supportive and deeply skeptical, according to a report by Brian Bardwell in Tax Analysts' Nov. 25 edition of State Tax Today.

A key question from those dubious about the tax breaks was whether the value of outgoing tax dollars can be accurately measured by something other than incoming tax dollars.

"I think it would be far more applicable for policymakers to look at apples to apples, because when you compare $335 million in tax credits to $7 billion in economic activity, that $7 billion in economic activity tells you absolutely nothing about the value to the state," said Utah State Sen. Curtis Bramble said. "That could just be churning dollars, and so that's very difficult as a CPA to wrap my arms around it."

In the end, the NCSL panel decided it needed more time and data. It will establish a subcommittee to examine the issue more closely and present recommendations to help states evaluate whether a film tax credit program would be appropriate in their circumstances.