Looking for a hint as to how the new Republican controlled Congress will work with the Democratic president for the next two years? 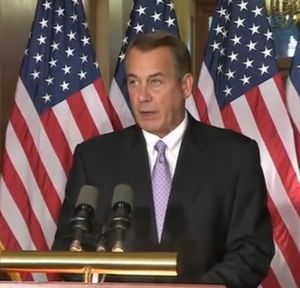 We got an answer to today: Not very well.

Republican House leaders finally filed the long-threatened lawsuit against the Obama Administration. The Senate is not involved in the action.

In recent months, two law firms withdrew from the case, many suspect because of potential political repercussions. House Speaker John Boehner (R-Ohio) on Nov. 18 hired Jonathan Turley, a George Washington University professor who is an expert on constitutional law, to handle the suit.

The challenge, which focuses on the twice-delayed Affordable Care Act rule that larger companies must offer health insurance, was filed with the U.S. District Court for the District of Columbia. The legal action also questions funding for financial assistance to individuals who comply with the insurance requirement component of the law, popularly called Obamacare.

"Time after time, the president has chosen to ignore the will of the American people and re-write federal law on his own without a vote of Congress. That's not the way our system of government was designed to work," said Boehner in a statement following the filing of the suit. "If this president can get away with making his own laws, future presidents will have the ability to as well. The House has an obligation to stand up for the Constitution, and that is exactly why we are pursuing this course of action."

Boehner held a press conference today, but he did not mention the lawsuit then. Word of its official filing came after the session with reporters.

Although the lawsuit challenges the president's actions -- "Beyond the President's role in the presentment process, the Constitution does not permit the Executive Branch to enact laws, or to amend or repeal duly enacted laws, including by adopting rules or taking other unilateral actions that have such an effect," according to the suit -- Obama is not a named defendant.

Instead, the action is filed against Health and Human Services Secretary Sylvia Burwell and Treasury Secretary Jacob Lew.

The legal burden will be on the House to show how it was damaged as an institution by the president's actions.

Legal and political watchers now are on official double duty, as this term the Supreme Court has agreed to hear an Obamacare case that questions whether the health care law's tax credit legally applies to coverage purchased through federal, not state, insurance exchanges.