In a few hours, the San Francisco Giants will attempt to make it three Major League Baseball playoff series sweeps in a row.

The Baltimore Orioles started it Sunday afternoon, taking the third straight game from the Detroit Tigers in their American League Division Series match-up. Later this week, the Birds will face the Kansas City Royals; that Missouri team swept the Los Angeles Angels of Anaheim on Sunday night.

The Giants hold a 2-0 lead in their National League Division Series battle with the Washington Nationals. The Bay Area fans are hoping they will get to use their brooms.

I'll be watching (one of the advantages of working from home) and rooting for a sweep, too. Not only am I a fan of several of the Giants' players, I love the city and the team's waterfront stadium.

Tax-savvy baseball fans: But I've got to give one Nationals' fan big props for putting a distinctly D.C. slant on a fan sign she brought to the marathon game on Oct. 4-5 at Nationals Park. 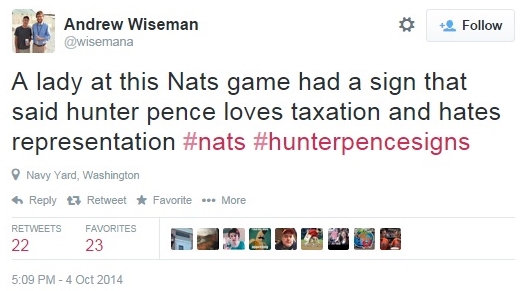 Only in the place called home by Congress could a sign about taxes be cheered at a sporting event.

Unfortunately, I can't find a photo of the "Hunter Pence loves taxation and hates representation" sign. In his Twitter announcement of the sign, Andrew Wiseman notes that it was shown on the park's giant TV screen, but not long enough for him (or apparently anyone else) to snap a photo.

UPDATE: The Nats staved off elimination today. If the NLDS goes back to Washington and the tax sign maker shows up again and someone gets/posts a photo, I'll plug it in here.

Hunter Pence has a sense of humor: If you're not a baseball fan, the Hunter Pence meme -- both at ballparks across the country and on social media -- started in August with a Mets fan heckling the lanky outfielder by holding a sign that said "Hunter Pence can't parallel park."

The movement soon spread from Citi Field to every other ballpark the Giants visited, with opposing team fans holding signs saying "Hunter Pence can't" this or "Hunter Pence likes" that. Now there's a continuing hashtag, #hunterpencesigns, on Twitter.

The Texan, who started his major league career with the Houston Astros, has taken it all in his long stride, even offering his own signs via his Twitter account.

Of course, it's easy to be a good sport when your team is winning.

NFL sees unfriendly tax signs, too: While many of us are watching the MLB playoffs, the real sport for most Americans this time of year is football.

Fans are still watching National Football League games and cheering for their teams, but the NFL itself has not had a good few months.

There's the ongoing controversy over the Washington team's derogatory name.

Then came the poor way the league handled domestic violence issues among its players.

These problems have prompted some federal lawmakers to once again question why such a rich business operation has tax-exempt status.

Back in 2013, before the latest spate of NFL scandals, Sen. Tom Coburn (R-Ok.) announced that as part of tax reform, he wants to eliminate the preferential tax status that currently applies to not only the NFL, but also the National Hockey League and Professional Golfers' Association of America.

These groups are exempt under Internal Revenue Code section 501(c)(6), which applies to business leagues, chambers of commerce, real estate boards, boards of trade, or professional football leagues (whether or not administering a pension fund for football players), not organized for profit.

Tax reform has stalled, but not the move to get the NFL back on the tax-paying rolls.

Sen. Maria Cantwell (D-Wash.) has introduced a bill to strip the NFL of its tax exempt status, primarily because of the Washington Redskins' name. Her Democratic colleague from New Jersey, Sen. Cory Booker, is sponsoring a similar bill that would use money raised from collecting taxes on the league to pay for state domestic abuse programs across the country.

Neither proposal is likely to come to a vote. Even if they did, they probably wouldn't pass.

But at least the tax fairness issue is being raised. It's a start on the tortuous stop-and-start path taken by most pieces of legislation on any issue.