Are tax deductions why Ben Bernanke is trying to refinance?

I finally finished up our 2013 tax return this week. Quick reminder to my fellow procrastinators: You've got to get your 1040 to the Internal Revenue Service by Oct. 15.

One of the several reasons the hubby and I (OK, me alone, since taking care of our taxes is my job) put off filing each year is that our returns typically involve a lot of forms. Even with tax software, it takes time to fill them out and I'm usually pretty busy during filing season.

One of those IRS forms is Schedule A for itemized deductions. Itemizing still works for us primarily because of our home-related costs.

Property taxes here in the Austin area are outrageous, but at least I get to deduct them. I also include our home mortgage interest on Schedule A.

That amount, however, has been dropping on the last few tax filings. Part of it is, of course, just the normal course of paying off the loan. But it's also lower now because a few years ago we refinanced our original home loan.

The refi cut into our tax deduction -- although there's still plenty to write off -- but it helped with our monthly cashflow.

Refi risk management: Imagine my surprise, and a bit of a thrill, when I learned today that the hubby and I are better home loan refi risks than Ben Bernanke.

"Just between us," the former Federal Reserve chairman told the audience this week at conference in Chicago (for which he likely was paid a six-figure sum), "I recently tried to refinance my mortgage and I was unsuccessful in doing so." 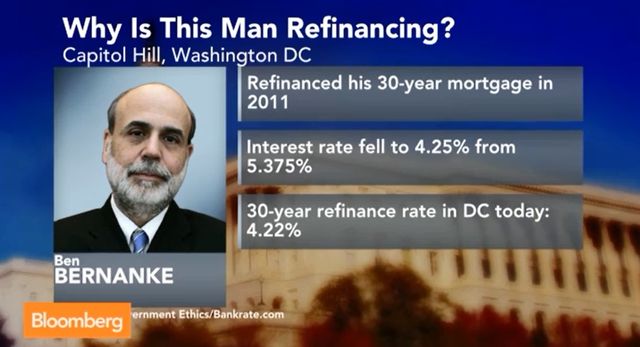 When the National Investment Center for Seniors Housing and Care audience laughed, Bloomberg reports that Bernanke said, "I'm not making that up."

Tougher loan guidelines: He added that "it's entirely possible" that lenders "may have gone a little bit too far on mortgage credit conditions."

But Bernanke's creditworthiness concern isn't tied solely to the tighter qualification rules instituted after the loan crisis that led to the housing market collapse.

Neil Irwin, writing for the New York Times' The Upshot, speculates that Bernanke's recent job change makes the financial guru a steeper credit risk according to the completely automated world of mortgage finance.

Tax code treats for the wealthy: Bernanke's home loan issue also highlights a flaw in the tax code, according to Harry Stein, associate director for fiscal policy at the Center for American Progress, a Washington group generally aligned with Democrats.

"He can do better investing the speaking fees in the stock market than using them to pay his mortgage and own his house outright," Stein told Bloomberg. "I can't imagine the public policy case for subsidizing leveraged investment for affluent people and there's just no world in which that makes sense."

The taxpayer subsidy to which Stein refers is one of the more popular, and most costly, tax breaks in the Internal Revenue Code.

The Joint Committee on Taxation estimates that between 2014 and 2018, the mortgage interest deduction on primary residences will come to $405 billion. And most of that money will benefit wealthier taxpayers.

Politically impossibility: No politician has proposed ending the mortgage interest deduction, at least not for an owner's main residence.

That's in effect to a degree now, thanks to the reduction of all itemized deductions for higher income taxpayers. The so-called Pease rule cuts Schedule A write-offs for those who make more than $150,000 if married filing separately; $250,000 if single; $275,000 if head of household; or $300,000 if married filing jointly or as a qualifying widow/widower.

The tax reform overhaul proposed by House Ways and Means Committee Chairman Rep. Dave Camp (R-Wisc.) calls for limiting the home mortgage interest deduction itself. Currently, the loan interest for new mortgages up to $1 million is deductible. Camp's plan would, under a four-year phasing process, halve that cap.

The Ways and Means' chief's mortgage proposal, as well as his overall tax reform outline, has stalled.

But every bit of interest in the tax code, whether sparked by Bernanke's mortgage refi problem or from other sources, at least keep the tax reform discussion going, albeit incrementally.