Estate gets $14 million tax refund on value of art

The hubby and I enjoy fine art.

Most of our vacations include trips to museums.

We even own a few original pieces by artists other than my grandmother, although I must say her work, like the Texas bluebonnet field below, is among my favorites. 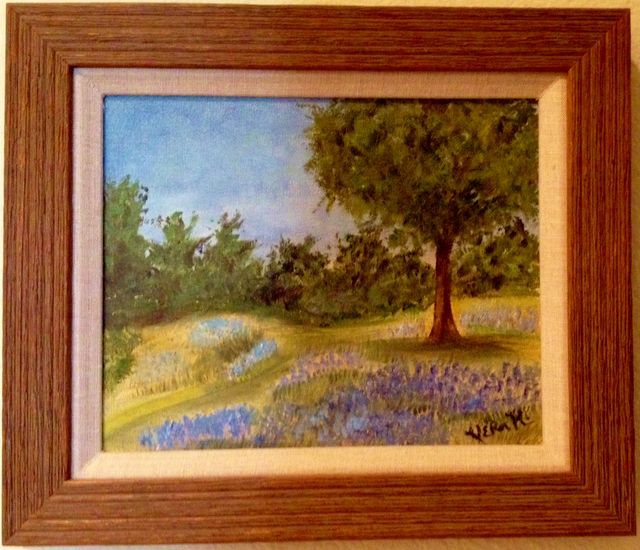 Her landscapes and more lighthearted pieces are very valuable to us. But Vera K originals and the handful of other paintings we own by more famous painters won't one day produce any big estate tax issues.

That was the case for James A. Elkins Jr. The Houston businessman and philanthropist amassed a $35 million art portfolio that included works by Pablo Picasso, Jackson Pollock, Jasper Johns, David Hockney, Willem de Kooning and other modern greats, according to the New York Times.

After he died in 2006, Elkins' estate paid millions in taxes on the art. The Internal Revenue Service, however, wanted another $9 million. And so began the court battles.

The case was complicated by the fractional ownership of the art. Elkins and his wife, who died before him, had given their three children partial shares in some of the paintings.

This financial move, notes the Times, is common among wealthy families with sizable art collections. It helps lower the future estate tax bill by giving away shares of the paintings during the owner's lifetime. Meanwhile, the art lover gets to keep the paintings on his or her walls to enjoy.

But it makes valuing the artworks at the time of death more difficult.

No art tax discounts: The IRS generally allows discounts on fractional assets when calculating estate taxes. The reason is because the assets might be hard to sell to someone who isn't in the family.

"Some portion of its value resides in the owner's being able to look at it. You can't, after all, put a third of a Picasso on three people's walls the way you can divide profits from a company. To comply with the rules of fractional ownership, the owners have to take possession of a painting for a period of time each year equal to their share."

The physical limitations have meant that the IRS rarely gives a discount for art that is split among heirs. That was the agency's position with regard to the Elkins' estate art.

The Tax Court agreed with the Elkins argument, but said the estate's discount amount was too high. The estate appealed to the United States Court of Appeals for the Fifth Circuit.

Last month, reports the Times, the appellate court "reversed the ruling on the discount and chastised the IRS for not providing any evidence to support its position."

The Fifth Circuit also awarded the estate a refund of $14 million plus interest, based on artwork discounts that ranged from 50 to 80 percent.

Valuable art tax break: That $14 million is this week's By the Numbers figure.

I hope the Elkins children are enjoying the court-awarded tax boon, which could be a template for others who have large, valuable art collections.

I also hope they are enjoying the paintings their parents collected.

Now I'm going to take a tour of the mini-museum the hubby and I call home. I know my Mam-ma would be thrilled to know she's one of the prime exhibitors.